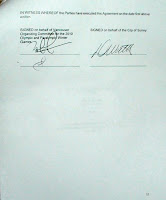 If you're a citizen of Surrey, B.C., you might want to ask your mayor how city hall expects to break ground on its $10.5 million Games Preparation Centre construction project in Whalley sometime in mid-to-late November and then have it up and running for VANOC to use by the end of February.
The facility to train Olympic workers and volunteers and rehearse ceremonies was announced way back on May 26.
The proposed construction period falls on the part of the calendar with the least sunlight and worst weather. Oh, and there is also Christmas and New Year's holidays!
Surrey promised VANOC that it would have 5,500 square feet ready to occupy for Feb. 1, 2009, but Mayor Dianne Watts admitted last week that won't happen. Yet, there is a clause in the contract between Surrey and VANOC that allows VANOC the right to seek judicial relief without any defense by Surrey if any part of the contract is breached. Watts also admitted that clause stands as-is, without any amendment.
Is Watts a miracle worker or is she gambling her reputation and taxpayers' dollars?
Click on the images to read the relevant portions of the contract, obtained via Freedom of Information.
Posted by Bob Mackin at 12:18 PM