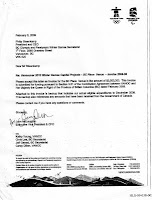 Turns out that VANOC chief financial officer John McLaughlin has either been muzzled by his employer or isn't a man of his word.

I'm hoping it's the former. McLaughlin has answered my questions before -- even though some of the answers were vague. But at least he took the time to do his best to represent his organization. For some reason, McLaughlin couldn't talk about the VANOC bid for a bailout from taxpayers and the unusual accounting for Olympic stadium construction.

When he was on a media teleconference Oct. 26 to discuss VANOC's annual report through July 2009, I asked about a letter he wrote March 26 to Philip Steenkamp, CEO of the B.C. government's 2010 Winter Games Secretariat. See above (click to enlarge). I got it via a Freedom of Information request to the B.C. government. In that letter, McLaughlin sought more taxpayers' money to pay for the Olympic torch relay and opening ceremony at B.C. Place Stadium. How much money? Well, that was censored by some bureaucrat, based on the fear that disclosure would compromise financial interests.

I also asked McLaughlin about the Feb. 5 invoice for $3.5 million for Games-related B.C. Place Stadium upgrades. It's also above. Until then, only $300,000 was spent. McLaughlin told media on a June 16 conference call that the VANOC board okayed on May 20 an $8.3 million withdrawal from the construction rainy-day fund.

The report for the period ending April 30 included an extraordinary footnote about the board decision, which made the B.C. Place budget $12.1 million. VANOC has never explained how the extra funds would be spent, citing the need to keep secrets to preserve a surprise for the opening ceremony. None of the government documents I received gave a hint. Such withdrawals from the construction rainy-day fund are supposed to be backed-up with paper work to the Secretariat, the B.C. government agency overseeing VANOC.

Could that money have actually been diverted to the torch relay and opening ceremony operational budgets, as per the March 26 plea? Could it have gone to payroll?

McLaughlin said on that Oct. 26 conference call that he would "be happy" to talk to me about these matters. "We'll arrange to talk after this," he said.

McLaughlin didn't respond to subsequent emails over the following week and VANOC communications vice-president Renee Smith-Valade and her staff claimed he was "unavailable." I had similar luck trying to get Steenkamp to talk.

When reporters hear "unavailable," it really means "doesn't want or not permitted" to comment. But I got to thinking, maybe VANOC is right. Maybe McLaughlin really is unavailable.