Behold, the official media freebie backpack of the 2010 Winter Olympics 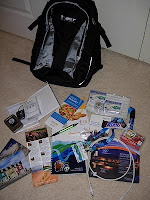 The 2,500 accredited print and online media personnel covering the 2010 Winter Olympics will get a bagful of surprises when they show their badge at a nondescript table in the Main Press Centre. Here is the detailed swag inventory for Vancouver 2010:

Anyone else is interested in getting a FREE MC DONALD'S GIFT CARD?

eToro is the #1 forex broker for newbie and professional traders.