B.C. Place Stadium was the most famous stadium on the planet for the Feb. 12 opening ceremony and Feb. 28 closing ceremony of the 2010 Winter Olympics.

The 1983-opened, 60,000-seat dome has a fascinating recent history that you can read here.

In May, the roof will be deflated and the structure will be retrofitted with a German-engineered retractable roof. If the pioneering project succeeds, it'll be on the front of every architectural magazine in the world.

If it doesn't, it'll be the west coast counterpart of Montreal's infamous Olympic Stadium. That billion-dollar, French-designed 1976 Games venue is known as one of the most-expensive stadiums ever built because the roof didn't work.

The British Columbia government and B.C. Pavilion Corporation, the taxpayer-owned company that runs B.C. Place, are not offering satisfactory answers to any questions about how the project will pay for itself.

The all-in price of the post-Olympic project was announced as $365 million for a retractable roof and interior renovations on Jan. 9, 2009. On Oct. 23, 2009, the roof alone was announced as $458 million. Minister responsible Kevin Krueger finally 'fessed up in a budget committee hearing when he told NDP critic Spencer Herbert that the interior renovation budget is $105 million.

So the price-tag today is $563 million. Fancy that: 563 is just 365 backwards. Is this the Liberal version of the NDP's disastrous back-of-the-napkin fast ferry fleet?

Along the way, the government and PavCo have said the stadium project would be financed by a 40-year government loan and the debt paid with long-term lease revenue from development of neighbouring property. Both Krueger and PavCo chairman David Podmore have been as transparent as the 27-year-old fabric.

I made two Freedom of Information requests to the ministry responsible for copies of the business plan and financing formula. I was denied on May 21, 2009 (click here) and Feb. 11, 2010 (click image on the right to enlarge). 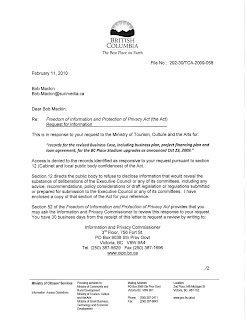 Which begs two questions: Is there a business plan at all? If so, why hide it from the taxpayers?

Details continue to be rather sketchy. The March 2-released PavCo service plan for the next three fiscal years says:

Complete the BC Place Roof Replacement project by Fall 2011 and within or below the approved capital budget, and report out quarterly to the Shareholder on progress of achieving construction milestones (cost, scope, schedule) and details of project benefits... PavCo is seeking revenue opportunities for BC Place based on timing for the completion of installation of a retractable roof in Fall 2011... PavCo is seeking proposals for the development of BC Place lands in order to achieve the highest, long-term return to the Shareholder.

Over to you, Mr. Podmore. Show us the business plan, please.
Posted by Bob Mackin at 2:06 PM