This has been an extraordinary year for Canadian sport.

But the Vancouver 2010 Winter Olympics were not just about sport. That is what I have sought to convey in this blog and will continue to do so as long as there are readers like you interested in the stories I have to tell.

Canada's Games. The Sea-to-Sky Games. The Games of the Great Recession. The Bailout Games. Whatever you call it, Vancouver 2010 will continue to have ripple effects from coast-to-coast-to-coast in 2011 and beyond. The costs, the legacies, the behind-the-scenes secrets. Three words: More to come. The first anniversary is rapidly approaching on Feb. 12, 2011.

The biggest, most-expensive event in Canadian history was also about politics, economics, security and culture. Will Canadian athletes remain a force to be reckoned with in winter sports or become contenders in summer sports? Is Vancouver a better place, after having held the Games? Will the city's poverty and homelessness ever be solved? What were the real costs to taxpayers? Was it all worth it?

The event ended when the cauldron was extinguished, but not the questions. Thanks again for reading and interacting.

May 2011 be a year of less fear, less greed, more peace and more fair play.

* * * * *
On the last day of 2010, I am dedicating my posts on this blog this year to Georgian luger Nodar Kumaritashvili, Minnesota bus driver Dale Roberge and my family dog, Lucky.

Kumaritashvili, 21, lost his life on Feb. 12, 2010, the opening day of the Games, during a luge training run at the Whistler Sliding Centre. Roberge, 71, died Feb. 22, 2010 while working in the Vancouver Olympic Bus Network. Lucky succumbed to liver failure Dec. 20, 2010. It was a difficult Christmas without her, but I am thankful for the kind words of friends. She was called Lucky, but I was among the lucky ones who shared 14 years with the world's friendliest dog. Consider donating to the SPCA. 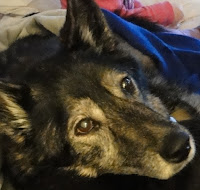 At Take Free Bitcoin you may get FREE bitcoins. Up to 22 satoshis every 5 minutes.

Ever consider automating your free satoshi claims with a BTC FAUCET ROTATOR?

From my experience the most recommended Bitcoin exchange service is YoBit.