Twenty-Five Years Ago: Something Happened Here

Twenty-five years ago on May 2, 1986, Expo 86 opened in Vancouver on the shores of False Creek and Burrard Inlet.

The world exposition on transportation and communication's official opening ceremony at B.C. Place Stadium featured Prince Charles and Princess Diana. So began the 165-day fair, which ended Oct. 13, 1986. it was the biggest event until Feb. 12, 2010, when Vancouver's Winter Olympics opened at B.C. Place. 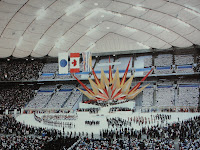 If you weren't there or want a refresher, see this three-part documentary here, here and here.

And, while you're at it, sing along to the theme "Something's Happening Here".

Expo was conceived in February 1978 by architect Randle Iredale and British Columbia Recreation and Conservation Minister Sam Bawlf. Iredale suggested Marathon Realty's industrial and rail lands on the shores of False Creek be transformed into a public area with a multi-use stadium, trade and convention centre and a museum in the old Canadian Pacific Railway Roundhouse. Bawlf proposed "an international exposition to complement Vancouver's 1986 centenary".

In June of that year, Tourism Minister Grace McCarthy dined with Canadian diplomate and Bureau of International Expositions executive Patrick Reid at the Cavalry and Guards Club in London, England. McCarthy suggested a neat gimmick for B.C. tourism: rent the Mona Lisa from the Louvre. Reid said the French would never let the famous painting Leonardo da Vinci painting out of their grasp. Reid suggested a world's fair would be a better, more attainable goal.

McCarthy said: "I asked him why Vancouver had never been chosen as a site for a world exposition. He said, 'because it never asked.' Well, we're asking for one now."

Expo 86 was my home-away-from-home for the spring, summer and fall of 1986. It was my first reporting gig. The Creek community newspaper, edited and published monthly by Beryl Wilson, graciously gave me space for a column I called "Expo-pourri". One day I visited with my friend Andrew Porter. Lo and behold, Prime Minister Brian Mulroney was also visiting with his family. So we followed them. Well, actually we wanted to get a closer look at his attractive daughter Caroline. (Hey, we were teenagers with raging hormones.) It was quite the surprise when we found ourselves in a photograph published in The Expo Celebration: The Official Retrospective Book (Whitecap, 1986) coffee table book. That's my right eye and full head of hair near the middle of the photo. Yes, I once had plenty of hair. The other photos on this page are from the same book. 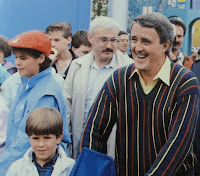 Back then, the Internet was for scientists and the military. But we got a sneak peek into the future with the ultra-cool Telidon at Expo 86.

Without Expo, there would likely not have been a 2010 Winter Olympics in Vancouver. The inukshuk from the Northwest Territories Pavilion was moved from the False Creek site to English Bay where it caught the eye of graphic designer Elena Rivera MacGregor. The Inuit stone sculpture became the VANOC logo.

The Expo 86 logo was designed by Frank Mayrs. The three circles represent air, sea and land while the diagonal line symbolized progress. Expo Ernie was the loveable robot mascot, bought for $53,000 by chairman Jim Pattison at the post-event auction. Science World, the Roundhouse Community Centre, Enterprise Hall (occupied by Edgewater Casino) and Canada Place are the only buildings remaining from Expo 86. Many of the temporary modules found new homes elsewhere in B.C. There are clusters in New Westminster and Delta industrial parks.

The party wasn't for everyone. Hundreds of people were evicted from Downtown Eastside welfare hotels, which were renovated and rented to tourists. Expo brought more tourists, but also residents. The price of land increased. Rental vacancies decreased. It's a more crowded and expensive city.

"Expo is already the number one topic of hatred down here -- if you were living in a 10-by-10 room and looked out to see a big pleasure palace you couldn't afford, you'd feel the same," said Downtown Eastside Residents Association's Jim Green at the time.

Sadly, there were at least two preventable deaths that we must not forget.

Alberta glazier Don Heald, 27, died in a Sept. 9, 1985 fall from the Plaza of Nations' roof when he was not wearing a safety belt. Karen Ford, a nine-year-old girl from Nanaimo, was crushed to death May 9, 1986 at the Canada Pavilion in Canada Place in front of her horrified parents, between a moving wall and a low ceiling beam on a turntable theatre. Canada Place officials admitted to a coroner's jury that they didn't want to spend extra on safety measures.

What are your memories of Expo 86? Good, bad or indifferent?

Are you going to the Expo 86 Lookback Party on May 6 at Science World?

Did anyone get their passport stamped at Garbos' Garbage Pavilion?
Posted by Bob Mackin at 10:58 PM

Thanks for sharing and writing this post.I thought it was all very interesting and I don't think I'd heard of that variation before. Now if I haven't heard of it.Rent Ottawa

Thanks for remembering. Rhonda Heald