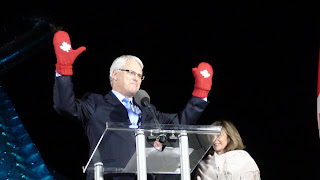 The 34th Premier of British Columbia is set to become the next High Commissioner of Canada to the United Kingdom, according to a Canadian Press report.

Gordon Campbell, who was hounded from office by a tax revolt last fall, is expected to be appointed to the highly coveted job any day by the Prime Minister's Office.

Campbell was known for wearing red Olympic mittens and waving the British Columbia flag during the 2010 Winter Olympics. He'll be Mr. Canada during the London 2012 Olympics, hosting Team Canada at the Canadian embassy across from Trafalgar Square. He'll also be charged with ensuring Canadians in the U.K. are kept safe during those Games.

So, Londoners, who is Gordon Campbell? For one thing, he was loved by the business lobby (particularly those in construction) and loathed by common people (his popularity fell to just 9 percent). If you happen to see him near a luau (not that there are many in your area of the world) or the sale of a railway, approach with caution.

Here is a Gordon Campbell timeline.