If the B.C. Liberal-allied Harmonized Sales Tax fan club, otherwise known as the Smart Tax Alliance, celebrates a victory for the "No" side when all the HST referendum ballots are counted, you can bet your dime and two pennies (or three nickels) that the Fight HST "Yes" camp will contest the result over irregularities. Especially if it's a close call.

Maybe the pro-business lobby that trumpets the economic advantages of a single value-added tax (instead of two) will win fair and square?

But it could just end up being a victory for democracy, with a decisive "Yes" vote to tell the government that any major taxation changes should be mentioned to voters before or during an election, not imposed upon them afterward. Such is the reason why Gordon Campbell was forced to retire from the Premiership and British Columbians have been subject to the divisive pre- and post-Olympic value-added tax debate. 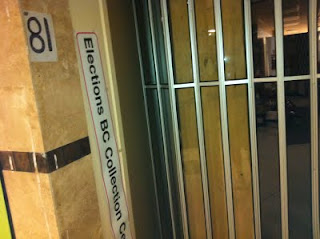 I experienced one of those irregularities when I went to the Elections BC temporary storefront at Capilano Mall on B.C. Day. The mall was open Aug. 1 and the Elections BC location was supposed to be. I arrived five minutes before the advertised 6 p.m. closing time to find the sliding door closed and lights off.

Strange. Elections BC is the same independent agency that so professionally conducts provincial elections. If a polling place closed five minutes before (or five minutes after) the advertised time on election day, there would be accusations of irregularities from all parties.

I asked deputy chief Elections BC officer Anton Boegman what happened. He replied on Aug. 2:

"The location was open on B.C. Day but the referendum official did close 5 minutes early that day because of a personal issue."

On Aug. 5, I returned to the same location and mentioned to the solo clerk that I had been there before 6 p.m. on B.C. Day and was wondering about the early closure. He admitted that he closed five minutes early because mall traffic was low and that he wanted to buy some groceries. He said I could have thrown my ballot envelope under the crack in the door, but I told him that was not satisfactory.

I questioned Boegman about whether this reason constituted a "personal issue" and why only one person normally staffed these storefront ballot collection centres.

"You are correct, collection centres should remain open for the hours that have been posted. Indeed all officials staffing these offices had been instructed to do so.

"Numbers of staff are determined based on the work requirements. During shift change-over times there are often two staff members present, as well as at other times when necessary. It was not considered a security risk to have solo staff.

"Please remember, these are not polling stations where voters go to receive and cast their ballot.  The collection centres are locations that provide another option for voters to return their mail-in ballot package to Elections BC."

Tell me about your experience with Elections BC, ServiceBC or Canada Post. Were you able to get an HST referendum ballot (if you didn't automatically receive one)? What was your in-person ballot delivery experience like?