That's a wrap for "plenty"-eleven

After hosting the 2010 Winter Olympics last year, some of you thought Vancouver would revert to its old, boring self.

The year 2011 was anything but dull and kept us journalists on our toes.

The Stanley Cup riot on June 15 was the biggest local news story of the year and the ripple effects will continue in 2012 as accused rioters and looters are slowly prosecuted. Those of us who remembered 1994 were hoping for a victory parade instead of that ugly, four-letter word.

There was only one day better than the Vancouver Whitecaps' triumphant Major League Soccer debut under sunny skies at Empire Field on March 19. That was Nov. 27 when the B.C. Lions won the Grey Cup at home for the second time. The first time was Nov. 27, 1994. Yes, that year also included a riot by Canucks' fans. 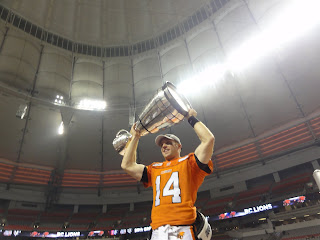 B.C. Place Stadium reopened from a $563 million renovation on Sept. 30. The jury is still out on the engineering marvel and we don't know the final cost to taxpayers. Telus was supposed to become the naming rights sponsor; the deal mysteriously went sideways. A proposed mega-casino was supposed to help pay for the project, but an effective campaign forced city council to vote it down on April 19.

The Occupy movement provided citizens across the broad political spectrum a chance to come together Oct. 15 at the Vancouver Art Gallery's north plaza to vent their frustration at the varying degrees of government action and inaction with the problem of so-called crony capitalism. The movement was part of a broader wave of global rage against corruption that toppled dictators. What next?

There were elections. Federal on May 2 and municipal on Nov. 19. Prime Minister Stephen Harper's Conservatives got a majority and Mayor Gregor Robertson's Vision Vancouver got three more years. On both counts, however, turnout was disappointing. Civic independents in Vancouver are pondering an alliance to neuter the influence of the real estate development lobby on governing Vision Vancouver and the opposition Non-Partisan Association. A desired fall provincial vote was scuttled by new Premier Christy Clark on Aug. 31. Clark was installed by the B.C. Liberal Party in February to replace Gordon Campbell. Clark has done little governing and plenty of campaigning. Evidently, you can take the host out of the talkshow, but you can't take the talkshow out of the host.

Power to the people who defeated the Hated Sales Tax. A mail-in ballotseemingly engineered to give the government the result it wanted -- to keep the Harmonized Sales Tax -- resulted in 54.73 percent of voters opting to quash the tax. The two Dutch Bills -- right-winger Vander Zalm and left-winger Tieleman -- celebrated at Jack Poole Plaza, in the shadow of the Olympic cauldron, on Aug. 26.

Alas, Tieleman (and others like Alex Tsakumis) still hope and wait for an inquiry into the corrupt sale of B.C. Rail. 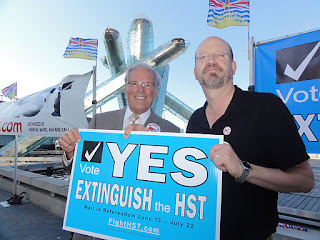 Here's wishing Premier Clark has a courageous change of heart and orders one in 2012.

Families want jobs, but they also deserve a transparent government they can trust.

Did you think about choosing the ultimate Bitcoin exchange service - YoBit.

Claim faucet satoshis over at Easy Bitcoin. Up to 33 satoshis every 10 minutes.

Did you ever try to maximize your free satoshi claims with a BTC FAUCET ROTATOR?

BlueHost is ultimately the best website hosting company for any hosting plans you need.