How did it start?

We know that the stadium wasn't finished in time for the Sept. 30, 2011 reopening, but the show went on anyway.

Telus crews, under the guise of the top secret "Project Frog," were in and out of the construction site throughout the summer to install the wi-fi and mobile phone antennas and video screens, but often had to hurry up and wait. B.C. Pavilion Corporation and PCL Constructors Westcoast had other priorities. The application of the fabric roof was way behind schedule, delayed from February to July because the Quebec steel contractor Canam and French cable installer Freyssinet couldn't get along and cables and machines were failing or breaking. 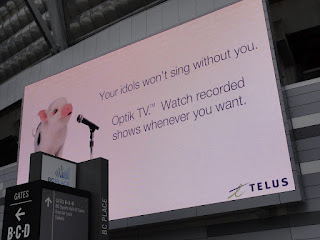 The reopening came and went. So did the marquee event, the 99th Grey Cup. The name remained B.C. Place Stadium. Telus had incurred extra costs and the value of the naming rights had diminished. It reasonably wanted a better deal than the one originally agreed.

Meanwhile, the B.C. Liberal Party ended 2011 with its "Risky Dix" attack ad campaign and began 2012 by soliciting various frequent donors to build a war chest for the Port Moody and Chilliwack by-elections. Telus, which gave $352,407.35 since 2005, declined.

The Liberals were miffed after awarding Telus the $1 billion, 10-year omnibus telecommunications contract in summer 2011 in controversial fashion.

The Liberals were hammered by Telus competitors, chiefly Bell, Rogers and Shaw, who accused the government of violating trade agreements and government procurement rules. The tendering process for nine different contracts lasted more than two years before the government's sudden, surprise bundling of the entire business into one deal, for one company.

Despite the party's ties to Telus, Premier Christy Clark has telecommunications connections of her own.

Not only is Clark a good friend of Bell-sponsored, Vancouver Whitecaps' owner Greg Kerfoot, but she was formerly employed as a CKNW radio talkshow host by Corus Entertainment, a company controlled by Shaw Communications.

In fact, Clark met on Jan. 30 in the Premier's Vancouver Office at the World Trade Centre in Canada Place with Shaw CEO Brad Shaw.

As if to make matters worse, Telus is suing the B.C. government. Deputy Minister of Finance Peter Milburn denied Telus's appeal for a Social Service Tax refund on Feb. 7, according to the March 9-filed B.C. Supreme Court documents below. Telus claimed it errantly paid or self-assessed $306,311.61 in taxes after the 2004 purchase of servers, operating software and maintenance from IBM, Lucent and Sun Microsystems. At least $96,580.40 was not refunded and remains in dispute.

While Clark has been noticeably quiet during a week-long break from the Legislature (after mis-handling the mess and message the previous week), some Liberal MLAs have used their time off to arrange photo opportunities with community newspapers to dole funds from a $30 million pot Clark announced at the Union of B.C. Municipalities convention on Sept. 30, 2011 in Vancouver.

MLAs Randy Hawes and Marc Dalton went to Mission to announce $185,000 for dehumidifiers at the Mission Leisure Centre’s three rinks. Hawes and Dalton told Abbotsford Times reporter Christina Toth that the money was left over from the stadium’s renovation!

The largesse comes from monies left over from the $563-million renovation of the B.C. Place roof. When the project came in $30 million below the last estimated cost, Victoria decided to disperse those dollars to recreation projects around B.C., explained Hawes.

"We just got the information on the weekend," he said.

Preposterous! Minister responsible for B.C. Place Pat Bell told me in a Jan. 30 interview: “We’re probably three or four months away from being able to roll out the final numbers.”

"For them to claim this is surplus money from a project millions of dollars over budget is a real stretch," NDP critic Spencer Chandra Herbert told me. "There is no surplus because they have no financing plan to pay for the project."

UPDATE, 5 p.m., March 22: Hawes claims "we are under the final budget for the stadium refit" (though he didn't mention any numbers). But he goes on to say:

"I either misspoke or was misunderstood. The recreation funding of $30 million for more rural communities is not from the under budget amount from BC Place. That was capital funding and from an accounting perspective, this funding must be from operating funds. I have looked at this funding as a way to allow some communities that might not benefit from the stadium remake to feel they have some benefit. I do feel a bit foolish having tied the funding directly to the under budget amount on the stadium. Incidentally, while the total recreation grant funding is $30 million, that does not mean the stadium savings was $30 million. Mea culpa."

UPDATE, 7 p.m., March 22: I asked Hawes for proof that the B.C. Place project was under budget. Not surprisingly, he has none.

"I don't know what the numbers are but Pat Bell has said numerous times that we are under budget. I believe the final numbers are still to come in."

Work continues at the stadium. A new fence is being erected outside the west side service entrance. The level 1 media entry is under renovation (and wasn’t complete for the Whitecaps’ home opener).

This is the same stadium that is now faced with a $35 million to $40 million shortfall because of the nixed Telus naming rights deal. The same stadium where an operating deficit of $49 million has been forecast for 2012-13 to 2014-15, according to the latest Service Plan.

The same stadium where grease leaks from the support cables have damaged the roof and could cost $10 million to repair.

The same stadium that will be the subject of an 85-day B.C. Supreme Court trial expected to begin in October 2013 between Canam and Freyssinet. Canam is suing for $26.15 million, Freyssinet wants $6.5 million. B.C. Pavilion Corporation is a defendant in the Freyssinet lawsuit.

Here's my modest proposal: move the B.C. Liberal caucus and its staff under the expensive big top at B.C. Place. They are clowns, who are running this province like it’s a circus.