How’s this for a coincidence?

Treasury Board is the 10-member cabinet committee that will receive the recommendation this fall from the joint Liquor Distribution Branch and Citizens’ Services Ministry committee deciding which private company will take over warehousing and hauling of liquor in B.C.

In the last week of August, no fewer than three members of Treasury Board announced they will not run for the ruling BC Liberals in the scheduled May 14, 2013 provincial election. Kevin Falcon quit as finance minister. Children and Family Development Minister Mary McNeil and John Les, Parliamentary Secretary to Premier Christy Clark, also said this was their last term in office. If Randy Hawes follows around Sept. 10, that would make four lame ducks on the committee that decides provincial spending, unless Clark makes wholesale changes with her next cabinet shuffle. The free enterprisers are fleeing the enterprise, with all signs pointing to a Liberal defeat and NDP victory.

While Energy and Mines Minister Rich Coleman (below left) is the one currently holding the booze portfolio (and a seat on Treasury Board), Les (below right) was more involved in the early days of secret talks with Exel than he appears. Far more involved.

From 2005 to 2007, in fact, then-unregistered lobbyist Mark Jiles met on several occasions with Les to promote the virtues of his $5,000-a-month client Exel. Les was a supporter of B.C. moving to an Alberta-style system. And it just so happened that the operator of the Alberta monopoly was a private company (and still is) called Connect Logistics, which is owned by Exel. 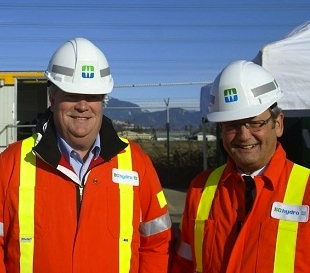 Les played the role of a passive matchmaker, suggesting that Jiles and Rob Madore, the former Connect Logistics general manager, forge an alliance with the B.C. Government and Service Employees’ Union. George Heyman was then president and Jeff Fox a director. Without workers agreeing to a private warehouser, nothing would happen.

Les was warm to the idea of Exel taking over, but opposed outright the privatization of LDB’s retail chain. LDB general manager Jay Chambers initially opposed selling off the logistics end of the business. Les was no fan of Chambers and thought it might be a good idea to replace him. Chambers stayed put until his surprising June 6 resignation, which was kept secret for eight days.

When Chambers finally did an interview after joining the Motor Vehicle Sales Authority of B.C. in July, he claimed the career move was unrelated to the LDB privatization.

LDB privatization never really gained traction under former Premier Gordon Campbell. But when Christy Clark came to power in 2011, the game changed. The HST was defeated, the government was in a budget bind and it certainly didn't hurt Exel that its lobbyist Patrick Kinsella was Clark's key Liberal leadership campaign strategist.

What about Les? After numerous interview requests since May, he finally responded to me the day he announced his resignation. I know Les knows a lot about this file, but he doesn’t want to answer any questions. Following is our Aug. 30 email exchange.

Hello Mr. Les,
Would you be available for an interview today or tomorrow to discuss your time on the LDB file, particularly 2005 to 2007 when you were being lobbied by Mark Jiles on behalf of Exel? I know that you met regularly with Mr. Jiles on this matter during that period of time.
Sincerely,
Bob Mackin
Business in Vancouver

No, sorry. The current Ministers responsible speak for government on this issue.

Thank-you for the reply, but the questions I have are specific to your time on the file and those questions are ones that only you would be able to answer.

By the way, a delegation from Exel toured the LDB’s headquarters and warehouse on Wednesday with Citizens’ Services official Pelle Agerup and fairness monitor George Macauley. LDB provided me lists of attendees of the May 9 industry information meeting, the May 10 proponents' meeting and tours of the Kamloops LDB warehouse. Citizens' Services provided the list of bureaucrats who decided the shortlist of four and are deciding the recommendation to Treasury Board. Citizens' Services, however, wants to keep the list of the Aug. 29 Exel tour group secret, citing a laughable wish to guard the "integrity" of the process.


Remember, folks, this is a process in which no business plan has been published. It is a process that appears to be driven by the Liberal-connected lobbyists for a unit of one of the world's largest corporations. A process in which the leading bidder speculated internally that it could use its connection to the minister responsible to influence the writing of the request for proposals in its favour or buy-out a related competitor to achieve the same outcome. It is a process that the NDP has likened to the scandalous BC Rail privatization of 2003.
Posted by Bob Mackin at 10:08 AM

Trying to find the Best Dating Site? Create an account to find your perfect match.