D is for December and dormant. B.C. Place Stadium is dormant most of December. The only two events scheduled inside are the B.C. High School Football Subway Bowl that kicked off the month and the Contact Winter Music Festival rave on Boxing Day.

But there is activity of another sort outside the stadium, beneath the westside video billboard that faces the Cambie Bridge.

Crews have erected wooden fences around the trees on the grassy knoll, a telltale sign of impending site preparation for excavation or even construction. 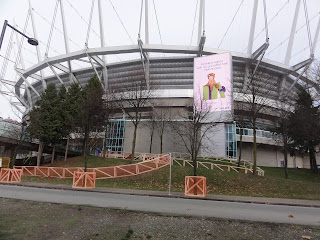 The west side of the stadium is earmarked to become the new home of Edgewater Casino. Parent Paragon Gaming extended the lease at the Plaza of Nations until 2015 after its expansion bid was shot down in April 2011 by widespread public opposition. But Vancouver city council gave Paragon the okay to move the existing licence across the street.

B.C. Pavilion Corporation, B.C. Lottery Corporation and Paragon executives huddled through the summer of 2012 about the development plan, as I revealed in this Vancouver Courier story. PavCo, BCLC and Paragon have been hush-hush, knowing that even a relocation of Edgewater will spark some public opposition.

Last spring, stadium management was getting ready for something to happen on the site.

According to the May minutes of the stadium's Facility Management committee:

"The Cambie Street Video Board at the West end may need to come down if development goes ahead; working through the details of this.

"Ongoing discussions with Paragon continue to take place for West End development and an announcement date is getting near, followed by the development permit application. If it all goes ahead, ground breaking is anticipated in the fall. This will impact the west entry for BC Place. GR (Graham Ramsay) said we would need to start coming up with alternate plans now.  Some relocation of services to the other side of Smyth (sic) St. will also be required. KD (Kathy deLisser) advised that a construction schedule is needed."

What are the odds that the wooden fences and orange nets around the trees are related to the new Edgewater?

UPDATE (Dec. 12): PavCo interim CEO Dana Hayden did not respond to my query, but B.C. Place manager of marketing and communications Duncan Blomfield did.


"Concord Pacific is preparing to redevelop their site located to the west of B.C. Place stadium.  The redevelopment of Concord’s site requires the removal of a pedestrian overpass stretches over the Concord site, connecting the Cambie St. Bridge to the stadium. The temporary fencing around trees on the BC Place site is to protect the trees from being damaged by demolition activity in the area. There are currently no plans to remove the board."

He is referring to 68 Smithe Street, the former Terry Fox Way. The plans show an "entertainment destination complex" on the stadium side of the street. Notice how it didn't say "proposed" and the naughty word "casino" is also missing?
Posted by Bob Mackin at 8:47 PM

Great info! Very simple and easy…nobody can explain as interesting as this. I appreciate your time and effort on making things simple and easily understandable.
Deck construction toronto