“She’s got her mug on TV out there, selling her propaganda campaign”

“Half of all advertising is a waste of money; we just don’t know which half.”
Henry Ford

On April 1, 1999, the opposition BC Liberals attacked the governing NDP on spending taxpayers’ money foolishly on government advertising.

Liberal leader and Premier-in-waiting Gordon Campbell rightly called it “propaganda.” NDP Finance Minister Joy MacPhail displayed the arrogance of someone who had been on the government side of the Legislature aisle too long.

Campbell: "How many heart surgeries have you cancelled for $600,000 of NDP propaganda?

MacPhail: "Actually, I'd like to correct the Liberal Leader of the Opposition. We're actually spending closer to $700,000 on our advertising campaign. People want to know how they're going to access the programs that have been funded in this budget..."

Campbell’s tag-team partner in holding the NDP feet to the fire was none other than his future successor, Christy Clark. 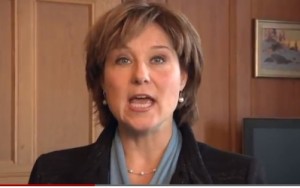 "So I'll ask the minister this. We were up all night debating this budget because they can't introduce it until the very last minute and before we're even finished our debate on second reading, she's got her mug on TV out there, selling her propaganda campaign. Can the minister tell us this: how many hospital beds, how many firefighters, how many police officers will not be on the street because she's spending $600,000 on her advertising campaign?”

Gretchen Brewin, the Speaker of the House, ordered Clark to withdraw the “mug on TV” comment. Clark complied, but the quotes remain on the public record in Hansard. Clark resumed her hard questioning.

“The minister says that the public just doesn't understand the NDP. It's not that the NDP have done anything wrong; it's not that they've taxed people out of the province; it's not that they've driven up waiting lists to amongst the highest in the country; it's not that parents are having to buy textbooks for their children's basic curriculum in schools. The problem is that the NDP are just misunderstood, so they've got to spend $700,000 of taxpayers' money to make sure that the public is just smart enough to try and understand the well-meaning government. Well, anybody who's seen their grandchildren move to Alberta or their grandfather not get his heart bypass or their kid not get a course in university understands NDP budgeting.”

Fast forward to 2012 and it’s the Liberals who are clinging to power, believing they’re so misunderstood that need to spend your money on advertising.

New records released via Freedom of Information include briefing notes containing scripts of answers to anticipated questions from reporters about government advertising spending.

One briefing note contains a chart that compares expenditures under the NDP from 1993-94 to 2000-01 to those during the Liberal era.

But the statistics demand a closer look and you'll find that the Liberals are no better than the NDP in election years.

Five years later, Ujjal Dosanjh was the Premier and the NDP budgeted $20.435 million, but spent $21.381 million. It didn't help the NDP because the Liberals under Campbell came to power in a landslide. Campbell kept his promise to slash spending. In 2001-02, the Liberals began their “new era” by spending only $5.276 million of a $22.853 million advertising budget.

In 2011-12, $36.065 million was approved and $34.56 million was spent. The spending trend is heading to $64 million over her less-than-two-year Premiership. Her BC Jobs Plan is the biggest expenditure and she told CKNW the goal is to drive consumer confidence. Evidence presented by Sun Media's David Akin shows that the BC Jobs Plan is not really working.

Meanwhile, the B.C. deficit has risen to $1.47 billion and the debt is $51 billion. Auditor-General John Doyle said the government understated the 2011-12 deficit of $1.84 billion by $520 million. And Moody's has downgraded the B.C. government's debt rating to negative.

Clark is spending a lot of your money to buy your votes. She could instead be spending on hospital beds, firefighters and police officers.

If the NDP under Adrian Dix win the May 14, 2013 election, will they enact new laws and policies to end the wasteful ad spending habits of power-hungry governing parties in B.C.?

Advice to ministers on B.C. government advertising.
Posted by Bob Mackin at 9:34 AM

How many small gifts and presents (that are, apparently, no longer being purchased in the name of 'budget cutting') could have been given to kids in the government's care this Christmas?

Christy will have to shovel a lot of it, to win any election. She had the opportunity, to clean up Campbell's corruption and thefts. She instead chose to work for Harper, as Campbell did before her. We have not forgotten Campbell's second election lie, the HST wasn't on his radar. Campbell's first election lie. The BCR wasn't for sale either.

Christy and her BC Liberals, were right there during, Campbell's reign of terror. BC citizens have, long, long memories.

Want To Increase Your ClickBank Banner Commissions And Traffic?