Party's over for Social Credit 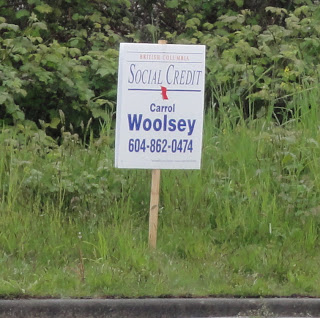 You are looking at a piece of British Columbia political history.

A sign for British Columbia Social Credit Party Vancouver-Hastings candidate Carrol Woolsey. The real estate agent is the only Socred on the ballot anywhere in B.C. for the May 14 election.

As Bernard von Schulman pointed out on his BC Iconoclast blog, the Socreds are essentially kaput because the party, or what's left of it, failed to meet Elections' B.C.'s two-candidate threshold for registration.

The party of free enterprise doers and dreamers, small businesspeople, real estate agents and car salesmen. Often God-fearing people. Sometimes dressed in the full Nanaimo. From 1952 until 1991 -- save for Dave Barrett's 1972-1975 NDP premiership -- B.C. was ruled by Social Credit.

W.A.C. Bennett (1952-1972), his son Bill (1973-1986) and Bill Vander Zalm (1986-1991) kept the party in power. Vander Zalm was elected the leader in a divisive Whistler convention in the summer of 1986 and led the party to re-election against the Bob Skelly-led NDP. Vander Zalm was a one-term wonder, cut short by his 1991 resignation over the Fantasy Garden World conflict of interest scandal. He was found to have used the Office of the Premier to help him sell his Richmond theme park to a Taiwanese billionaire.

Rita Johnston was elected leader (and Canada's first female premier) by caucus and then by the party membership, but ex-Vancouver Mayor Mike Harcourt won the 1991 election. Social Credit fell to third-party status with six seats. Gordon Wilson parlayed his performance in the leaders' debate into official opposition status for the BC Liberals.

Cliff Serwa in Okanagan West was the party's last sitting MLA. He retired in 1996. His granddaughter is world champion ski cross athlete Kelsey Serwa. The party has been leaderless since Eric Buckley split to form the B.C. Party in 2000.

Come May 14, the above sign will be a souvenir for someone. May I suggest the B.C. Archives seek custody.

That the Socred name made it to the 21st century is an achievement. But a sign of the times for a party of the past is that its 2013 election signs boldly lists a phone number under the candidate's name. This is the age of websites, Twitter and Facebook handles and even QR codes.
Posted by Bob Mackin at 2:28 PM

I'd take all the Socreds we've ever had in BC before this corrupt, inept bunch that will soon (not soon enough) be out of work. Crusty and her bunch have taken the concept of "politician" to lows I've never seen before in Canada.

Many best real estate agents did a lot for their communities, they have affected his society in different ways, wherever good or bad.