The May 23 partial collapse of the 1955-built, Interstate 5 bridge over the Skagit River in Washington has sparked a renewed interest in the structural safety of bridges across the continent. 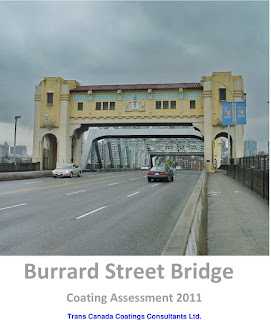 In Vancouver, the Burrard Street Bridge will turn 81 years-old on July 1. The 1932-built concrete and steel bridge cost $3 million to build, but is visibly crumbling and rusting. A seismic upgrade program finished in 2006. Bike lanes were installed in 2009 at a cost of $1.3 million.

The Burrard Bridge's uncertain future was the focus of my Investigators segment on the Simi Sara Show on CKNW AM 980 on May 24. Unfortunately, neither city hall's chief engineer Peter Judd nor city hall spokeswoman Mairi Welman responded to my requests for comment.

In 2012, City of Vancouver paid almost $1.24 million to Associated Engineering to conduct a series of reports. More than 500 pages of were released to me via Freedom of Information, but almost 380 pages have been "greyed-out" -- withheld in their entirety, like the one on the right. City hall claims the reports contain advice that, if disclosed, could harm the city financially.

The minuscule amount of information that is visible claims the bridge is in fair or poor condition. While it does not indicate imminent danger, the lack of information disclosed raises important questions about whether it really is safe. The detailed report card on the bridge and cost estimates were censored. Why does Vision Vancouver want to hide information from you about such an important piece of the city's infrastructure?

The reports I received via FOI are linked below. Click on the titles and see for yourself. Notice all the censored pages.

UPDATE (May 27): I found the following online about different bridges in different B.C. jurisdictions on Vancouver Island: Reports about the E&N Railway bridges and the Johnson Street Bridge. Perhaps City of Vancouver could learn a lesson about transparency from these documents. Meanwhile, the Ontario provincial government offers information about its bridges. Ontario proactively discloses a list of bridges that includes names, locations, condition rating, ages and most-recent year of inspection. B.C.'s government has a database, but, according to the Ministry of Transportation, is "very technical and wasn't designed as a public-facing website, but we are looking at ways we can provide information to the public."