A take on ticketing 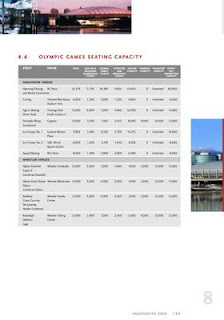 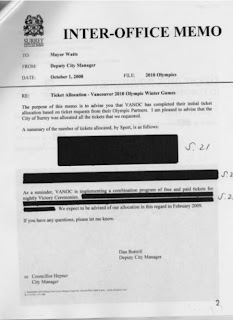 How many tickets are available for the public to buy to attend the 2010 Winter Olympics and how many have been sold so far?
If you have the answer, please tell me. VANOC has a $96 million account in case the Games are canceled, heaven forbid, by disaster. That's the only hint released so far. The first phase ticket sales won't be disclosed until sometime after the Jan. 31, 2009 quarter-end financials are published.
How many tickets were supposed to be available? The 2003-released bid book includes a preliminary list (above right, click to enlarge). The bid book, as Vancouverites have learned, is akin to an etch-a-sketch book. It should've come with a giant asterisk, as in "subject to change."
VANOC has demonized the secondary ticket market. Call them what you will. Ticket brokers. Scalpers. Selling event tickets for more than the face value is illegal in various North American cities, but not in Metro Vancouver.
Meanwhile, governments that have paid taxpayers' money into VANOC coffers have exercised contractual rights to buy tickets. No discount, but there is a separate and secretive process.
City of Surrey can buy more than 900 for the Games, but did it buy that many? And for how much?
Surrey doesn't want taxpayers to know, because it fears harming the business interests of VANOC. It censored documents obtained under the British Columbia Freedom of Information act (above centre, click to enlarge). Surrey is not the only public body acting this way, but it is the best example of a disturbing trend.
Imagine that, governments hiding expenditures from their citizens.
Only in British Columbia, the "Best Place on Earth!"
Posted by Bob Mackin at 6:35 PM