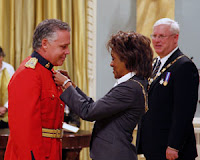 On June 5, RCMP Vancouver 2010 Integrated Security Unit chief operating officer Bud Mercer was in Ottawa to become an Officer of the Order of Merit of the Police Forces.

The career achievement award was for “outstanding commitment and achievements in policing.” Mercer was among 13 RCMP employees so recognized. Gov. Gen. Michaelle Jean, who will declare the 2010 Winter Olympics open on Feb. 12, pinned the medal to Mercer’s red serge.

Mercer was inducted to the order as “Asst. Comm. Gary R. (Bud) Mercer.”

Mercer is in charge of a $491.9 million RCMP-led security force for the 2010 Winter Olympics and Paralympics in Vancouver. Bud's budget is the biggest slice of the $900 million federal Olympic security pie.

Mercer took over in 2007 from Bob Harriman who apparently neither quit nor was fired. A fuss about the budget -- originally $175 million -- was not the reason why Harriman couldn't complete his mission. Nosiree. Nothing to see here. Move along.

So who is Gary Russell Mercer, the soft-spoken cop with a piercing stare and sometimes dry wit who prefers to wear a finely tailored suit when under the media eye?

Mercer’s rise to top Olympic cop came after working his way through the ranks of the RCMP in B.C. His career is Forrest Gump-like, in that he was party to some of the most controversial policing operations in British Columbia history. He joined the Mounties in 1976 and has worked from the Atlantic to the Pacific. Very little about Mercer is contained on the V2010 ISU website, but a lot about Mercer can be found on the Internet by searching for just 10 minutes.

I discovered he held the rank of Corporal on Sept. 23, 1996 when he was witness number 41 on day 44 of the Gustafsen Lake trial.

Fifteen people were charged and convicted after the month-long, summer 1995 Gustafsen Lake Standoff near 100 Mile House in the B.C. Interior. Shuswap natives rebelled after a rancher denied them access to land for their traditional sun dance ritual.

Notes taken by court observers indicate he was, at the time, a 20-year veteran of the force who was on the emergency response team since 1984. He also had 15 years experience as a dog master, in charge of a five-person dog team in the Fraser Valley.

Mercer was called to Gustafsen Lake as an ERT member and arrived Sept. 10, 1995. He stood guard while comrades laid explosives on a road for the planned explosion of a truck the next day.

Mercer was part of the police operation at the University of British Columbia campus outside the Museum of Anthropology where Prime Minister Jean Chretien hosted leaders from around the Pacific Rim. Students gathered en masse to protest the presence of Indonesian dictator Suharto and Chinese president Jiang Zemin on their campus. Mercer participated in the arrest of student activist Jonathan Oppenheim and joined Sgt. Hugh Stewart in the infamous pepper-spraying of students.

Hughes found police did not give students ample time to clear before unleashing the spray. Hughes also said the weapon employed by "Sgt. Pepper" and Mercer was unreasonable. (Stewart, by the way, was part of the security detail at the 2001 Summit of the Americas in Quebec City and came out of retirement to act as a senior planner in the formation of V2010 ISU.)

During the summer of 2000, Mercer became a player in the War in the Woods. Then an Inspector, Mercer was accused in September 2000 by Friends of Elaho Valley anti-logging protester Dennis Zarelli of aggravated assault. Zarelli claimed Mercer used a pruning rod to cut ropes supporting a platform that held protesters 50 metres above the forest floor near Squamish.

A Justice of the Peace approved the private prosecution, but it backfired. The charges against Mercer were stayed because of video evidence. B.C. Supreme Court Justice Sunni Stromberg-Stein cited Zarelli for obstruction of justice on Dec. 12, 2006.

On July 26, 2007, the B.C. government and Squamish Nation announced the old-growth Elaho Valley was saved from logging.

On Oct. 24, 2007, Mercer -- then-Deputy Criminal Operations Officer in B.C. -- was announced as the new chief operating officer of V2010 ISU. He was picked by a federal and provincial committee, the RCMP and VANOC.
Posted by Bob Mackin at 7:30 AM