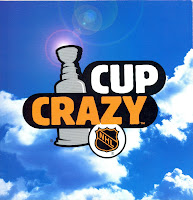 Has the Stanley Cup been to Stanley Park?
Why, yes it has. And I was right there with it, at the foot of the statue of Lord Frederick Arthur Stanley of Preston: the former Conservative Member of the British Parliament, the Earl of Derby and Canada's Governor General from 1888-1893.
When Labatt was the official beer of the National Hockey League, it conducted its Cup Crazy promotional tour across Canada.
The tour came through North Vancouver in 1999 and made a stop at the North Vancouver city fire hall.
I was working for the North Shore News newspaper at the time and arranged for West Vancouver resident and Hockey Hall of Famer Clint Smith to show up for a photo with the grandest trophy in North American sport.
Smith was a member of the 1940 Stanley Cup champion New York Rangers.
Hold your booing, please.
Mr. Smith, who lived to be 95 before being called up to the Heavenly Hockey League in 2009, was a Saskatchewan native. Before becoming a Ranger in 1936, he spent three years as a Vancouver Lion in the North West Hockey League. In 1933-34 he scored 25 goals and assisted 14 in just 34 games.
By virtue of being a Hockey Hall of Famer and a member of a Cup-winning team, Mr. Smith, whose nickname was "Snuffy," got to hoist the Cup. Needless to say, it made his day.
It made my day when I continued on with the Labatt and Hockey Hall of Fame crew for lunch and a jaunt into Stanley Park where we posed with the Stanley Cup at the popular statue of the park's namesake.
Lord Stanley never witnessed a Stanley Cup game. But he did enjoy Vancouver's most famous park. It opened on Sept. 28, 1888, but Lord Stanley himself came for the official dedication on Oct. 29, 1889.
I predict the Stanley Cup will return to Stanley Park sometime during June 2011. And Vancouverites will be proud of calling the park -- and the trophy -- theirs. 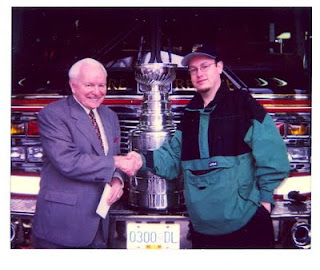 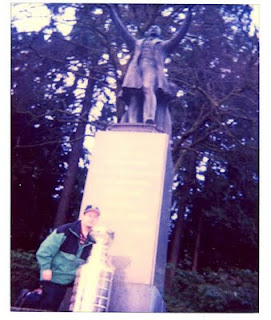 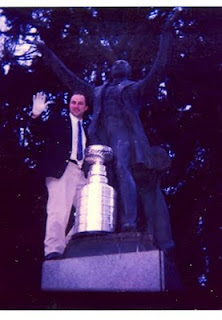