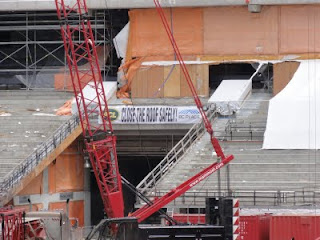 The goal of any workplace is zero injuries/zero fatalities.

A reliable source has told me that a worker at the $563 million renovation of the 2010 Olympic stadium was very seriously injured by falling glass on the afternoon of July 18.

According to his employer, the worker injured is okay.

Warren Elmer, co-owner of Glastech, told me in an interview that he estimated 2,500 pounds of glass shifted when a safety apparatus became uncoupled. "The other one still held, so it twisted and knocked him into a wall or a column. It could've been worse."

"We were thankful last night, we got the word back from the hospital there was no broken bones, no real concussion to speak of," Elmer said. "He just was knocked pretty hard and got some lacerations on his leg and scared for his life."

How long will the worker be off the job? Elmer said it's too early to determine.

"It could be based on his ability to overcome the psychological nature of it and more or less the stitches and the healing will probably govern how long he'll be away," he said.

Port Coquitlam-based Glastech is the subcontractor replacing the glass that surrounds B.C. Place Stadium's concourses and installing new windows. Out is the original bronze tint. In is a green/blue hue.

WorkSafeBC has responded with some details of the July 18 construction accident at B.C. Place Stadium. According to the Crown corporation's Megan Johnston:

- The incident occurred just after noon on Monday, July 18.
- A forklift with a boom-style attachment was lifting a load of plate glass at the worksite when the load fell off the forks, striking a worker.
- The worker was transported to hospital and treated for his injuries - bruising, concussion, some lacerations.
- WorkSafeBC responded and was onsite yesterday afternoon, and continues to look into this incident.
- No orders have been written at this time.
- Worker was an employee of Glastech Glazing Contractors based in Port Coquitlam.

"A worker was treated and released from hospital after being injured on site on July 18, 2011.

"Details of the incident are still to be confirmed, and are currently being investigated by WorkSafeBC, the general contractor and worker’s employer. A piece of equipment being used to lift a pallet of packaged glass released, causing the load to drop to the ground.

"The worker that was guiding the load is understood to have been pushed aside, resulting in minor cuts, bruising and a mild concussion. The worker was taken to hospital and released the same day.

"The equipment involved in the incident has been withdrawn from use on site until the cause of the incident is determined.

"PCL and BC Place are cooperating with WorkSafeBC to investigate the circumstances of the incident, and to prevent any future recurrence, ensuring the workplace remains safe for all workers on site.

"To date, the safety record for the BC Place roof project has been exemplary.

"Both PCL and BC Place take workplace safety seriously. PCL is a construction industry leader in providing rigorous safety training for each and every one of its workers.

"Although no one was seriously injured, such an incident reminds all of us that safety is something we cannot take for granted, and we need to act on it every minute of every day."

UPDATE 12:38 p.m. 7/19: The latest information from my source is that the worker suffered a fractured leg and the incident took place outside Gate A.

UPDATE 10:05 a.m. 7/19: The incident involved glass falling from a forklift. Still no word on the condition of the worker.

UPDATE 8:50 a.m. 7/19: I have confirmed that the incident did take place, but am trying to find out more about the worker and his or her condition. B.C. Pavilion Corporation, the taxpayer-owned operator of the stadium, is putting together a statement via its public relations agency Pace Group. PavCo CEO Warren Buckley has not yet responded to my email or phone calls.

PavCo is likely to trumpet a historically low record of workplace injuries. That is debatable. I have proof that B.C. Place management covered-up a 2006 incident involving a janitor who collapsed on the job, but later died in hospital. WorkSafeBC slapped PavCo with a hefty $68,970.57 fine on Nov. 6, 2009 after an electrician was nearly electrocuted on March 10, 2009.

B.C. Place is scheduled to reopen Sept. 30 with a Canadian Football League game between the B.C. Lions and Edmonton Eskimos. Sources also tell me that the schedule and budget are both in jeopardy. Construction crews are frantically working, around the clock, as they race to finish the most-expensive and complex renovation of a public building in this province's history.
Posted by Bob Mackin at 10:46 PM

Hi – It’s good to read such interesting stuff on the Internet as I have been able to discover here. I agree with much of what is written here and I’ll be coming back to this website again. Thanks again for posting such great reading material!!