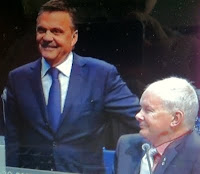 From one port city popular with tourists to another. From the southwest corner of Canada to the southeast coast of Africa.

Vancouver 2010 Winter Olympics chief executive John Furlong took a break from his recent appointment as co-chairman of the Stanley Cup Riot Review for a previously scheduled engagement in Durban, South Africa to attend the International Olympic Committee’s 123rd session. Furlong was there to present the official report of the Vancouver Winter Olympics on July 7, exactly 494 days since the Games closed at B.C. Place Stadium.

“It seems fitting that with the arrival of a new Olympic region, PyeongChang, that it's time for us to say goodbye,” said Furlong, pictured above right with International Ice Hockey Federation president Rene Fasel. “We could feel all the emotions they were feeling throughout the day, having lived that experience ourselves.”

“We’re very close to being no longer and by this time next year, we will, in fact, be no longer.”

Furlong summarized the main achievements of the Games to the IOC members at their first annual general meeting since the Feb. 9-11, 2010 session hosted at the Westin Bayshore Hotel in Vancouver.

"We had much heartbreak and happiness, lots of adversity and celebration, but somehow we managed to achieve the vision that we set out for ourselves,” Furlong said.

As an aside, Furlong told the IOC members that B.C. Place Stadium reopens “in October”. (Does he know something we don’t or is it still truly on track for the Sept. 30 B.C. Lions meeting with the Edmonton Eskimos?)