Of Giggles Graham, two years on

It's a controversy that shows no end in sight and the next chapter is Nov. 4 in Victoria, B.C.

Victoria Police Chief Jamie Graham famously stated on Nov. 30, 2009 during the 12th annual Vancouver International Security Conference at the Marriott Pinnacle Hotel: "…you knew that the protesters weren’t really that organized when on the ferry on the way over they all rented a bus. They all came over on a bus. And there was a cop driving the bus."

The protesters were members of the Olympic Resistance Network and they hired a bus to take them, via ferry, from the Lower Mainland to Victoria for the Oct. 30, 2009 launch of the cross-Canada Olympic torch relay. They joined with anti-Olympics protesters in Victoria for a non-violent, pre-Halloween march around the capital city to disrupt the first day of the 106-day procession that ended at the Vancouver Games Feb. 12, 2010 opening ceremony. 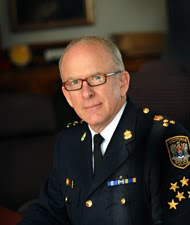 Bruce Dean, a self-described "professional recreationalist," read my Dec. 1, 2009 story about Graham's revelation. Dean had a 2007 run-in with Victoria Police officers who confiscated his camera and deleted photographs because they claimed he had shot pictures of an undercover cop. The Police Complaint Commissioner sided with the cops.

On Dec. 15, 2009, Dean complained to the Office of the Police Complaint Commissioner, alleging Graham disclosed "the identity of an undercover officer to the general public" and that by disclosing the identity he was "jeopardizing the safety of the officer."

RCMP South East District Chief Supt. Don Harrison was hired to probe the matter. In his June 16, 2010 report, Harrison came to the astounding conclusion that Graham did not breach the public trust. He bought ex-North Vancouver and Surrey RCMP chief Graham's claim that his comments were “made spur of the moment and meant to be entertaining and humorous, nothing more.”

Anyone who listens to the entire recording of Graham's speech can tell Graham broke the ice with witty comments about Tiger Woods's marital problems. When he later told the story of the torch relay security operation -- including the monitoring of protesters -- Graham was gleefully boasting. But he wasn't joking.

Graham was hoping his notorious sense of humour would be enough to get him through this controversy, like it did when he was Vancouver's police chief and gave a bullet-riddled shooting target for ex-Vancouver city manager Judy Rogers. Graham is a big fan of the late Leslie Nielsen and even met the Naked Gun star at a 2005 police fundraiser in Vancouver.

Victoria Mayor Dean Fortin took Harrison's advice and decided the misconduct allegation was unsubstantiated. Both Dean and the B.C. Civil Liberties Association successfully complained about the Harrison report being flawed. Harrison used valuable space in the report discrediting complainant Dean, when he should have been probing Graham's conduct.

A new external investigation was ordered on July 30, 2010.

Burnaby RCMP Chief Supt. Rick Taylor found Graham committed "discreditable conduct" even though he found no evidence that Graham knew a police officer was actually at the wheel. Graham “did cause concern amongst senior police personnel engaged in planning and security operations” for both the torch relay and 2010 Winter Olympics.

Graham was alleged to have engaged in discreditable conduct -- "conducting oneself in a manner that the member knows, or ought to know, would be likely to bring discredit on the municipal police department," according to section 77 of the Police Act.

Graham stuck to his story of wanting to "poke fun" at the protesters. Harrison called it "highly inappropriate in that setting and context and a very poor attempt at humour."

On March 31, 2011 a discipline hearing was held in which Taylor and Graham, represented by lawyer Sean Hern, testified. On May 12, 2011 the Victoria Police Board decided that a written reprimand was the appropriate discipline for Graham.

But that was not the end.

B.C. Police Complaint Commissioner Stan Lowe ordered a review on the record because it was a "more efficient and effective means of adjudicative review having regard to the sufficiency of the record of disciplinary decision and the issues engaged."

"There was no opportunity for submissions or applications for leave to provide submissions by parties involved in the complaint," Lowe wrote in an Oct. 7, 2011 decision ordering another review. This one will be adjudicated by retired Provincial Court Judge Jakob de Villiers.

"Having reviewed the provisions of the Police Act relating to a Review on the Record, including its legislative development, I am of the view that a material procedural irregularity has occurred, requiring a new Review on the Record of this matter in the interests of procedural fairness in accordance with administrative law principles," Lowe wrote.

Meanwhile, Dean is a rightfully dissatisfied citizen, who only wanted an important public official (Graham) held accountable. Two years later, he is still waiting for that accountability. Once and for all, he wants it settled in the form of a public hearing. He wants Graham to face tough questions in a room open to the public and media.

"I am the only one who has made no false claims, or broke any rules, laws or violated the Police Act. My involvement in this kangaroo court system started when the police violated my Charter rights, seized my camera without warrant and then destroyed evidence -- all sancionted by the OPCC, the Victoria Police Department and the City of Victoria," Dean said via email.

"I'm just a broke single disabled father trying to raise my daughter in poverty. I don't have time for this bullshit and the taxpayers should not be paying for inadequate policing and repeat-after-repeat of failed investigations."

Dean and Fortin are expected to be at a "review management conference" Nov. 4 at 2:30 p.m. in boardroom C at the OPCC office at 501-947 Fort Street in Victoria. Will Graham be there?
Posted by Bob Mackin at 11:58 AM