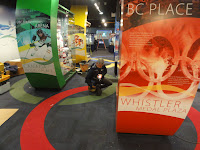 The Vancouver 2010 Winter Olympics opened and closed at B.C. Place Stadium, and that’s where the tangible memories are now housed.

Almost two years after the Games, the B.C. Sports Hall of Fame and Museum doors reopen Jan. 6 at Gate A with its marquee Vancouver 2010 Gallery.

The 2,000 artifacts in the Olympic and Paralympic collection include gold, silver and bronze medals, mascots Miga, Quatchi and Sumi, a podium, torches, the late Jack Poole’s Olympic Order award, athlete uniforms and equipment and gifts brought by national Olympic committees. For Olympic pinheads, the Hall purports to have every single one of the keepsakes made for the 2010 Games. 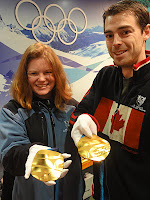 The treasures were gathered via the tireless efforts of president Sue Griffin, curator Jason Beck, operations director Allison Mailer and trustee Joanie McMaster. Griffin reasonably feared before the Games that cash-strapped VANOC was going to put everything up for auction.

Much of the collection is organized in five display cases resembling each of the Olympic rings and representing the venues where the Games took place. You will find artifacts worn, used or signed by Canada's stars of the Games, like Alexandre Bilodeau, Joannie Rochette, Maelle Ricker, Jon Montgomery, Sidney Crosby and Hayley Wickenheiser. But there is a plethora of other nuggets that might surprise you.

There is a suit, helmet, goggles and practice snowboard that belonged to Johnny Lyall, who flew through the air on a ramp from level 4 and landed on the floor of B.C. Place to greet opening ceremony viewers from around the world. His script on a folded white piece of paper in large Helvetica type is included in the display case: "Welcome to the Vancouver 2010 Olympic Winter Games! Bienvenue!" 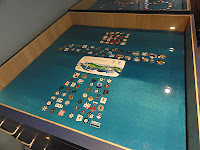 Nancy Greene-Raine’s torch relay uniform and the torch she used to light the ceremonial cauldron was autographed by Wayne Gretzky, Steve Nash, Catriona Le May Doan and Rick Hansen.

Two dozen of the 84 nations of the Games donated a set of ceremonial uniforms.

"Azerbaijan, they've got some good pants, just as good as the Norwegian curling crew,” said the hall’s operations director Allison Mailer during a preview tour. 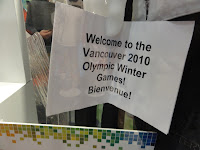 Pakistani alpine skier Muhammad Abbas, who was 79th in the giant slalom, donated the hand-carved, wood plank skis on which he learned as a child.

"Our wish list has been completed, we're just so thrilled,” Mailer said. “The only thing we really want is a Shaun White snowboard. I think we'll still work on it. Maybe we'll send him pictures of the gallery and tell him what's missing." 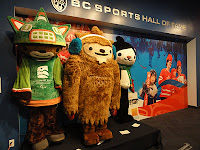 The provincial sports shrine also reopens with a redesigned Hall of Champions that features a touchscreen multimedia archive of all 325 individuals and 54 teams inducted since its 1966 establishment. Nearby is a display case that include mementoes of Vancouver visits by the 20th century’s greatest athletes -- a Santos jersey worn and signed by Pele and handwraps autographed by Muhammad Ali -- plus the puck used to score the Vancouver Canucks’ first National Hockey League goal and a stopwatch that timed the famed 1954 Miracle Mile between Roger Bannister and John Landy at Empire Stadium.

The grand reopening is planned for Feb. 10, two days before the second anniversary of the 2010 Winter Olympics.
Posted by Bob Mackin at 7:33 PM