The Stanley Cup riot 2011 accountability clock has been deactivated and removed from this blog. 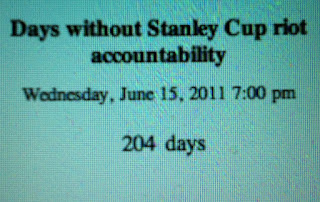 Let it be known that the first person was 20-year-old Ryan Dickinson.

He was charged Dec. 5, 2011 with participating in a riot, two counts of mischief over $5,000 and for breaking curfew on the night of the riot. He was arrested two days later by Coquitlam RCMP and spent Christmas in jail, according to a story in The Province.

On Jan. 6, Dickinson copped a plea bargain and entered a guilty plea in Vancouver Provincial Court for participating in a riot and breach of recognizance. He is to be sentenced Feb. 7 and the hearing could be broadcast, if the judge approves a government-driven Crown counsel application.

Dickinson was put on probation for a year in October after a separate assault conviction. He is, coincidentally, a sheet-metal apprentice who works at a window-repair company. The streets were riddled with broken metal and glass on June 15, when the Vancouver Canucks were embarrassed on home ice to the Boston Bruins in the Stanley Cup final.

No public officials, whether they be elected politicians or appointed staff, have taken fault for the poorly planned Stanley Cup fan zone in downtown Vancouver on June 15.

If one ever does, you'll read about it here.
Posted by Bob Mackin at 1:39 PM