The media had been told that president Bob Lenarduzzi and chief operating officer Rachel Lewis would run the Major League Soccer franchise as a duo since the former Tottenham Hotspur executive announced his shock resignation on Dec. 9, 2011. Barber worked his last day on Feb. 29. (Sources told me Barber was frustrated that his decision-making authority fell victim to principal owner Greg Kerfoot's micromanaging.)

On April 12, part-owner Jeff Mallett surprised the gathered media at the Hyatt Regency Hotel by introducing John Furlong, the chief executive of the Vancouver 2010 Winter Olympics organizing committee, as the club's new executive chairman. Lenarduzzi and Lewis will report to Furlong. Furlong, who served VANOC at the pleasure of Premier Gordon Campbell, will report weekly to Kerfoot, the mysterious, media-shy West Vancouver tech tycoon.

Furlong told the media the idea was hatched at a dinner with Kerfoot about six weeks earlier. The job is a full-time gig, without an equity stake in the company, that includes a desk on the same floor in Gastown's Landing where he led the Vancouver 2010 Bid Corporation and its successor, VANOC, after the International Olympic Committee chose Vancouver in 2003 to host the 21st Olympic Winter Games.

Irish-born, 61-year-old Furlong chairs the Own the Podium advisory board, is a director of Whistler Blackcomb Holdings and was recently promoted to chairman of the Rocky Mountaineer Railtours' board (more about that below). The Whitecaps' gig gets precedence for Furlong, who did not receive 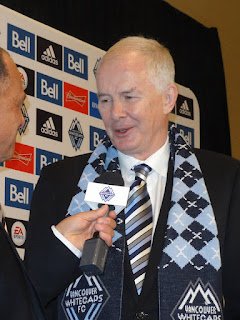 any IOC or Canadian Olympic Committee appointment after the 2010 Games.

Furlong, who grew up playing centreback, professes a lifelong love for the beautiful game. He recounted how he thrilled he was to watch England's 1966 World Cup win live on TV. He may owe a small debt of gratitude to the world's most powerful soccer executive for helping Vancouver get the Games.

In the following excerpt from his 2011-published memoir, Patriot Hearts: Inside the Olympics that Changed a Country (Douglas & McIntyre), Furlong revealed details about the 2002 night he spent with FIFA president Sepp Blatter at VANOC founding chairman Jack Poole's ranch. (Many have called for Blatter to resign amid longstanding allegations of bribery and FIFA's reluctance to immediately implement recommendations from well-respected transparency expert Mark Pieth's Independent Governance Committee.)

The bid process could hardly be described as logical. Sometimes we sought out Hail Mary opportunities on the off-chance something might work out. Delegates were scattered all over the world, so face time with them as often hard to arrange. When we had an opportunity, we pounced it immediately. One such occasion occurred that August. Canada was hosting the women's U19 World Cup of soccer. Sepp Blatter, the iconic head of the International Federation of Association Football, or FIFA as it is commonly known, was in the country and, we were told, was going to be passing through Vancouver on his way to Edmonton, where the tournament was being held. Working with our friends at the Canadian Soccer Association, we arranged to squirrel him away for an evening to talk Olympics. Sepp was an IOC member and an influential one at that. We wanted to make an indelible impression on him. We decided this would be a night for Jack Poole and his wife, Darlene, to put on the ritz at their sprawling estate in Mission, a rural community 90 minutes east of Vancouver. The plan was to send a helicopter for Sepp and fly him to Jack's place, while showing off a little of the local geography at the same time.

We met Sepp when he touched down on the estate's landing pad. Yes, Jack had his own landing pad. The Pooles poured on the charm. The steak was brilliant and so was the apple pie. We had a great evening talking to one of the most influential sports kings in the world, who waxed eloquently about sport politics, including those that surrounded the IOC.

Sepp was in his element -- at the centre of attention with no pressure. I asked him at one point what his vision was for the game of soccer. "I will not be satisfied until every child on the planet owns a soccer ball," he said. And he meant it. Sepp was a formidable man, short and stocky and with an imposing face, who seemed to dominate his surroundings the way someone much bigger might. By the end of the night we were friends. As always, we didn't ask for Sepp's vote but we were all smiles when he told us we could count on him.

For the record: Vancouver hosted the North American Soccer League's last single-game Soccer Bowl in 1983 at B.C. Place Stadium between the Tulsa Roughnecks and Toronto Blizzard. The NASL championship was contested one more time in 1984 in a best-of-three format between the Chicago Sting and Toronto. The Sting swept the Blizzard in two games, winning the trophy in Toronto.

Meanwhile, Furlong opted not to comment on the ongoing labour dispute between Rocky Mountaineer and its unionized on-board attendants from Teamsters local 31. This, despite being the chairman of the upscale tourist train company's board.

"You need to talk to Randy (Powell, president) about that, that's how we've chosen to do it," Furlong said. "I think this is an ongoing dispute and it wouldn't be appropriate for me to talk."

Workers were locked out last June and the company intends to continue using replacements. The company also chopped limbs off trees on adjacent public land, but claims it was a mistake.
Posted by Bob Mackin at 6:49 PM