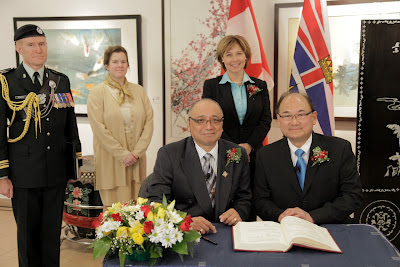 Variety is the spice of life and I'm offering a little candy intermission from the posts on the brewing scandal that is the privatization of British Columbia's liquor distribution and warehousing.

That photograph was part of $3,600 of taxpayers' money blown in one afternoon by Premier Christy Clark on a ceremony closed to the public and media.

On March 24, 2012, a news release was issued at 5:30 p.m. notifying B.C. that John Yap had been sworn-in as Minister of State for Multiculturalism. It didn't say where the ceremony took place. I found out, via Freedom of Information, that audio/visual services cost $2,300 (including $100 to rent a B.C. flag and stand), a hired videographer billed $616 to shoot the ceremony and the room at the Chinese Cultural Centre was rented for $150.

This was on the second-to-last Saturday of Clark's March from hell (read about that here). It was also the second-to-last Saturday of the fiscal year in which the Office of the Premier was budgeted $9 million. Governments like to spend their full budgets instead of pump unused bucks back into the coffers. It's a "use it or lose it" mentality that doesn't respect the fact that the money isn't theirs. It's yours.

See the documents below. (And prepare yourself for more #LiquorLeaks)