Mayor Gregor Robertson has been showered with gee-whiz stories from various media outlets for setting up an account on Sina Weibo, China's state-censored answer to Facebook and Twitter rolled into one.

You may remember how Robertson praised China and pooh-poohed democracies during his September 2010 trade junket, that included a stop at the Shanghai World Expo. 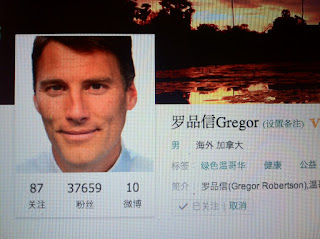 A Nov. 1 Globe and Mail story said Robertson signed up the previous morning and had amassed 16,000 followers just hours before the story was published. You can find the Mayor's page here.

Notice the background photo is a lovely aerial shot of the City of Vancouver, with Stanley Park in the foreground. Notice it doesn't include East Vancouver. Only the Westside and West End, with a bit of downtown.

The fans just keep coming. By the afternoon of Nov. 3, Robertson had a whopping 37,659-plus fans on Weibo. Impressive, since it took nearly four years for him to build his Twitter following over the 27,000 level. Quite an achievement and, I quickly assumed, it must have something to do with being related to Canadian-born, Chinese hero Dr. Norman Bethune.

Then I looked closely at the Mayor's Weibo page. I copied and pasted some of the messages into Google Translate. One user made the shocking allegation that 95% of the Mayor's Weibo fans are from fake accounts!

Here is that translation, with the original copied below.

@ Canada homes
[Vancouver Mayor @ Robertson letter Gregor microblogging why so many zombie fans? Who is behind? ] Saying that Vancouver Mayor Gregor Robertson came microblogging been the the Vancouver local Chinese and Chinese microblogging touted. Xiaobian mayor of less than 1 million fans, even behind. 3 days after the mayor of the microblogging fans number 35000, allegedly in excess of the number of Twitter 4 years! Browse to the mayor's fan list inadvertently shocked: newest fans 95% + are zombie powder
@加拿大家园
【温哥华市长@罗品信Gregor 微博 为什么那么多僵尸粉丝？谁是幕后黑手？】话说，温哥华市长罗品信来到微博，受到温哥华本地华人和主要华人微博力捧。小编在市长不到1百粉丝时就力挺。3天后市长微博粉丝数3.5万，据称超过Twitter 4年数量！不经意间浏览到市长的粉丝列表，震惊：最新粉丝95%+都是僵尸粉

Here is the translation of the response from the Mayor (or whoever is staffing his Weibo account).

Thank news! We will investigate with Sina.
谢谢消息！我们会跟新浪 调查一下。Thank you for the help, let us know if there is anything we can do @加拿大家园

I'll let you know how this develops.

(For those keeping score at home, 5% of Robertson's Twitter followers are faked accounts, 18% are inactive and 77% are good, according to the Status People Fake Follower Check.)