A pitcher's worth a couple hundred words, at least 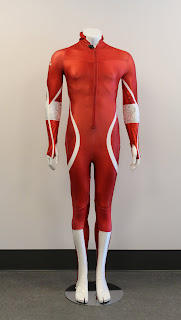 The B.C. Sports Hall of Fame and Museum got a special delivery May 17.

What’s more interesting is how it arrived.

Stuffed inside a beer pitcher.

“We had a good laugh and almost immediately everyone realized that it must be from Jon Montgomery!” said Michael Markowsky, the Hall's creative marketing and outreach coordinator. “Who else would send their uniform packed inside a pitcher of beer? What a fantastic sense of humour!”

Markowsky says the worn skinsuit has Montgomery’s name on the collar with “a little bit of duct tape on the collar at the top end of the zipper (near where Jon’s chin would be), perhaps to hold the zipper in place so it doesn’t flap around or come undone during a race.”

Alas, the suit wasn't on Montgomery when he slid to gold. Nor was the jug the one he sipped from on his famous victory walk through Whistler Village. We know that Sidney Crosby's golden goal puck from the men's hockey final was eventually found and deposited at the Hockey Hall of Fame, but the whereabouts of Montgomery's jug are unknown!

"The suit is an official suit. Jon never wore it but it was one of three suits he was given to compete in," Bobsleigh Canada Skeleton spokesman Chris Dornan told me. "The pitcher is one that the COC sent him from Canada Olympic House in Whistler thinking it was the one he was given. He thought so to for some time until he watched the video and realized it was not. But it was one he drank out of at Canada Olympic House after the race."

Montgomery's skinsuit is among 1,600 artifacts the Hall has collected from the Vancouver 2010 Olympics and Paralympics. Most will be on display beginning Nov. 4 when the Hall reopens at B.C. Place Stadium with its new Vancouver 2010 Gallery.

British Columbia's sports shrine and Canada's Sports Hall of Fame (to open July 1 at Canada Olympic Park in Calgary) will be the two places where most of the tangible memories of the 2010 Games will be on display for decades to come.
Posted by Bob Mackin at 10:28 AM