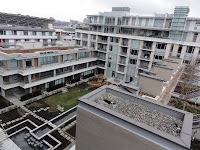 It has been six months since Vancouver city hall's bombshell petitioning of Millennium Southeast False Creek Properties into receivership over a then-$740 million debt on the Olympic Village, which reopened May 15, 2010.

On May 18, court-appointed receiver Ernst and Young published its second update to the British Columbia Supreme Court.

Here are the highlights:

Marketer Bob Rennie’s campaign "has resulted in 124 sales or unconditional offers that have closed or are awaiting completion, having a gross sales value in excess of $86 million".

"This is an outstanding beginning to the marketing process, and substantially accelerates the receiver's timetable for populating," said the E&Y report.

E&Y said that it paid $57 million to city hall from the sales of strata units.

Fifty-seven is a significant number elsewhere in the report, which questions the credibility of lawsuits filed in March and April by owners of 57 units in five parcels.

E&Y points out that the B.C. Supreme Court filings don’t name SEFC Properties as a defendant, but only charge the City of Vancouver and the companies set up to sell the condo buildings with misleading disclosure statements and shoddy workmanship. The plaintiffs want refunds. The city and Salescos have fought back with defence statements. The report said the lawsuits have impacted public perception of the development.

E&Y takes issue with the videos of condominium chaose released by the buyers’ lawyer Bryan Baynham.

E&Y speculates the famous clip of water cascading through a pot light would have been shot in October 2010 "when a toilet overflowed while the unit's occupant was not at home, with the result that there was water damage to the unit on the floor below. The resulting damage was repaired shortly thereafter, prior to the receiver's appointment."

Another clip showing an exposed ceiling would have happened in late November 2010 when “the first cold weather of the season exposed the fact that the heating system had not been routinely maintained, and many units throughout the Village on False Creek experienced problems”.

E&Y admits there were 1,990 reported deficiency claims but only 193 were outstanding as of May 5. Of those remaining, 106 are cosmetic.

"Construction deficiencies are common in all real estate developments, but the completion of the deficiencies at the Village on False Creek was substantially in arrears when the Receiver was appointed.”

As if to further tarnish the suing residents, the E&Y court filings include an email exchange between a person, whose name has been censored, and E&Y’s Michelle Grant.

In a Jan. 13, 2011 email, with the subject “The hoops have been jumped through”, the disgruntled buyer takes issue with the deficiencies and the glacial speed of New Home Warranty.

"We need to come to terms by the end of the week or the media blitz I have planned will ensure zero sales until May...”

A separate email said the person "managed to re-connect with an old friend (name deleted) you may know him as he was NBC's London Bureau Correspondent for the last couple of years and has recently been called back to New York. We talked about the possibility of doing a Dateline on the Olympic Village and they would even contact my crew."

In yet another email, the person says: "What do you think will happen when taxpayers find out their money is being used to screw over my parents… do the right thing and void my parent's (sic) contract.”

The Village’s commercial offerings remain slim with only a TD Bank and the Legacy Liquor Store. Discussions continue with London Drugs and Overwaitea Food Group. While both have “expressed their confidence” in the Village, E&Y says “occupancy levels… will be critical to firming up their opening dates."

Overwaitea planned since 2007 to open an Urban Fare upscale grocery store in the Village, but now it may not. It was given a $900,000 tenant improvement allowance to design, build and outfit the space. No work was performed, but the company repaid the funds. E&Y maintains there are other grocers interested in the space allotted for Urban Fare.

London Drugs has been built-out and awaits installation of fixtures. Its opening, however, "remains dependent on the opening of an anchor grocer tenant."

A Terra Breads location will open by July 1 at Athletes Way and Manitoba Street near the seawall. The Daniel Group, which operates the Mill Marine Grill at Coal Harbour, has an agreement in principle to open the Village Kitchen restaurant and bistro in spring 2012 at the Creekside Community Recreation Centre. A proprietor of a medical office has made a conditional offer to occupy a spot next to the TD Bank this fall.

BrandLive, the company behind pavilions for Vancouver and Alberta during the 2010 Winter Olympics, was hired to make the Village a destination for community events. Tentatively scheduled are the following:

So, how much is this costing? Ernst and Young revealed that during the Nov. 17, 2010 to April 8, 2011 period, it racked up more than 5,000 hours of work and billed $1.67 million (excluding out of pocket and administrative expenses and HST).

In April, city hall forecast a $48 million loss on the Olympic Village after taking control of $45 million worth of Millennium Development properties to pay down the $757.9 million debt.
Posted by Bob Mackin at 5:49 PM