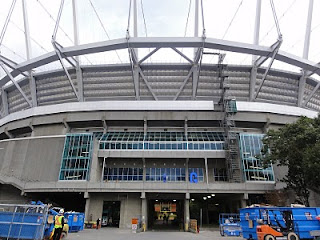 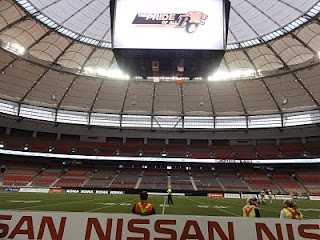 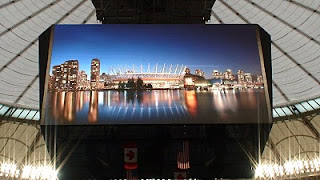 Those attending the B.C. Lions' Friday Night Football meeting with the Edmonton Eskimos or the Oct. 2 Vancouver Whitecaps’ Major League Soccer game against the Portland Timbers are advised to arrive early, with tickets in-hand. The stadium has new staff and systems that have not had a full-scale dress rehearsal. The margin of error is great, whether it’s toilets that haven’t been flushed since the Paralympics’ opening ceremony or the new 54,500 red and grey seats. Can’t forget the roof, which crews rushed to finish sealing amid this week’s early fall storms.
Executives of Stantec Architecture and Schlaich Bergermann and Partner engineering have told me that the stadium is safe for the public to enjoy, but it will not be 100 percent finished for several weeks. They believe the finer details of items not yet installed or functional will not be obvious to the untrained eye.

For more about the history of the stadium and its controversial rebirth, read my feature here from the Vancouver Courier.
The stadium is the source of great public discourse in British Columbia, especially because it's financed by taxpayers. Here are the five reasons for and against the $563 million investment.

Why B.C. Place Stadium is the Big Wow:

First of its kind. Never before has an air-supported dome been deflated, the structure been reinforced and a cable-stayed retractable fabric roof been built above. If it works, this could be touted worldwide as an engineering marvel.

Sustainability. Instead of demolishing and rebuilding elsewhere, the 1983-built shell was recycled and retrofitted. Air conditioning was not included in the original project, but the retractable roof and adjustable louvers will introduce fresh air and natural light.

Provincial playroom. No city that claims to be world class is without a sizable stadium. Vancouver is fortunate to have a stadium right smack-dab downtown, rather than the suburbs.

Urban flair/flare. When B.C. Place Stadium opened in 1983, it was the catalyst for the downtown Vancouver of today. Without it, the city would probably not have hosted Expo 86 or the 2010 Winter Olympics and neither would there be a forest of condominium and office towers downtown, connected to the suburbs via rapid transit. The province and the city are banking on the renovated stadium to spur local real estate tycoons, such as Francesco Aquilini and Terry Hui, to develop northeast False Creek.

Soccer magnet. The stadium was the leverage needed to get the Vancouver Whitecaps into Major League Soccer. It is a candidate to host the 2015 Women’s World Cup final and is big enough to compete with Seattle’s CenturyLink Field to host international matches, including visits by European giants like Manchester United and Barcelona. Canadians do not live on hockey alone and soccer is the most-played team sport in British Columbia.


Why B.C. Place Stadium is the New Big Owe:

First of its kind. Never before has an air-supported dome been deflated, the structure been reinforced and a cable-stayed retractable fabric roof been built above. If it doesn’t work, this could be touted worldwide as an engineering mistake, on-par with Montreal's 1976 Olympic Stadium.

Money pit. Even with the Whitecaps becoming the main tenant, with twice as many home dates as the B.C. Lions, B.C. Place will remain reliant on trade shows for revenue. Don’t be surprised if it keeps getting operational subsidies from government. The stadium has never been a money-maker on its own. As for the $563 million capital cost, the stadium opens without a naming rights sponsor (though Telus is still waiting in the wings) and without certainty of a commercial leaseholder (Edgewater Casino can move but city hall won’t let it expand, casting doubt over the deal).

No baseball. PavCo justified the retractable roof by encouraging summertime events. It also erected the second-largest videoboard in North America. The shoebox-style, centre-hung videoboard is so massive that it may fail a Major League Baseball inspection. That would mean no spring training visits from the boys of summer. PavCo opted for the massive screens because it felt the advertising generated year-round would far outweigh an annual weekend exhibition series.

In the hole. The stadium itself is more transparent with bright new entries and of course with the new retractable roof. But there is no transparency for those who paid for it. The citizens of British Columbia. The business case was deemed a cabinet document when I requested it via Freedom of Information in 2009. The government pegged the budget at $365 million four months before the 2009 election campaign. Five months later, the price had ballooned to $563 million. We don’t know how much the Whitecaps and B.C. Lions are paying for rent or whether their wealthy owners were ever asked to invest in the project. Since 2001, the B.C. Liberal government has privatized BC Rail and certain functions of BC Hydro. Why does the government insist on holding onto a stadium that should instead be managed or owned by a private entity?
What do you think?
Comment below, Tweet @bobmackin or email me at the link in the right column.
Posted by Bob Mackin at 3:52 PM