B.C. Place open, but not smoothly 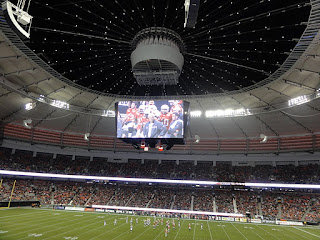 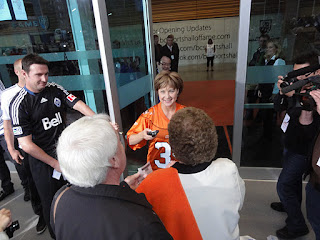 The renovated B.C. Place Stadium is two-for-two in the category of opening the roof for events. In other categories, it's not so successful.

The fabric retracted for all to see before the Canadian Football League's streaking B.C. Lions beat the Edmonton Eskimos 33-24 on Sept. 30 and before the listless Vancouver Whitecaps fell 1-0 to their Major League Soccer expansion cousins, the Portland Timbers on Oct. 2. It was really quite spectacular and was much faster than advertised.

The Lions' 50,213 crowd was below the 54,500-seat capacity, but the attendance was the most for an open-air team field sport in British Columbia history. The only events bigger were the annual Molson Indy Vancouver auto races between 1990 and 2004.

The stadium reopened as B.C. Place, not the new corporate name. Telus is the telecommunications provider and its logo is on advertisements on heavy rotation throughout the stadium's network of LED and HD screens. Expect the naming rights deal with Telus to be announced before the Grey Cup, though likely sooner. The delay may have been for political reasons, but Telus is not complaining. It got a $1 billion, 10-year deal from the government to supply its services.

Many of the 50,213, however, missed large portions of the game because they were in lineups for tickets, food and beer. Food and beer were scarce and apparently not enough workers were on the job. Seeing as how there was no dress rehearsal, it should have been an all-hands-on-deck event. Why, in this economy, would newly hired or returning workers skip the chance to work, especially on reopening night? Will management be held accountable? Will any angry Lions' fans demand a refund or free tickets to a future game?

There were reports of toilets that didn't flush and taps that did not work.

At the Whitecaps' game, with an announced crowd of 21,000 the complaints of poor mobile phone service continued. It's evident that telecommunications provider Telus has not finished its installation. There were also season ticket holders seated in locations that were different from what they had been originally told and sold by the Whitecaps. Some tickets were designated for seats that did not exist. There were cases of two tickets assigned to the same seat.

All these problems point to what I predicted many months ago. That construction would be the be-all and end-all, causing customer service and operations to suffer. It was inevitable. B.C. Pavilion Corporation announced a Sept. 30 opening date, which was a full month sooner than anticipated. The installation of the steel and cables was behind schedule, delaying the February start of roof fabric installation. And so the domino effect began.

An open house was held July 31 while work was in progress, because a Sept. 25 pre-opening open house was nixed. The schedule was too tight. After doing a series of well-organized regular media tours to update construction progress, B.C. Place did no full-scale media preview in the week of the stadium opening. The B.C. Lions' Sept. 29 practice was the first and only opportunity and only offered access to field level. Even the much-ballyhooed stadium interior webcam was shut-off Sept. 20.

As if the rocky opening weekend of operations wasn't enough, B.C. Pavilion Corporation is girding for a possible strike by its B.C. Government and Service Employees' Union-represented workers. The strike vote is to be announced Oct. 3 and a source tells me turnout was both heavy and angry. Genesis Security and Panther Group contractors have taken over some of the jobs once performed by union members, who already know they're not getting a pay raise in the next contract.

Workers were especially peeved when they received a memo from stadium general manager Howard Crosley, which warns that it may harm the Grey Cup on Nov. 27. (See the full text below).

Are you a B.C. Place worker? Tell me about your experience. Email me at the link to the right, or enter comments below.

To all BC Place Employees,

Everyone has been working diligently to ensure the new Stadium is unveiled on Friday. As one of our team members, you are the key to delivering a brand new guest experience in our amazing new facility!

I know you share my enthusiasm for the many events in the weeks and months ahead from the BC Lions to the Vancouver Whitecaps FC, and leading up to Canada’s largest event, the Grey Cup!

Unfortunately, all those events could be in jeopardy. The union that represents employees in the stadium has announced that it is conducting a strike vote that might result in a strike disrupting these events.

As one of our 600+ employees, you are entitled to participate in that vote and cast your ballot.

I encourage you to do so, and voice your opinion on your needs at BC Place.

Further, I respectfully encourage you to vote against a strike that could disrupt the scheduled events, tarnish all of our reputations as providers of the best entertainment experience, and interfere with your income and your enjoyment of your employment at these events.

I have listed the voting locations and times below. Please take the time from your busy life to cast your ballot. Ensure we get off to a great start!

If you have any questions regarding this vote or your participation in it, please give me a call at 604-661-3445.

I will see you on Opening Day for our inaugural event. And I thank you for joining me in making this a brand new era for us all at the stadium!

The times and locations of the vote are as follows: