History not on the Canucks' side 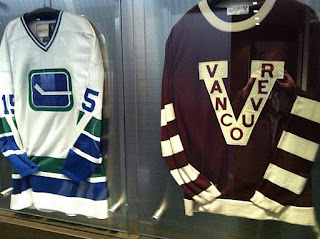 The Vancouver Canucks open their 41st season on Oct. 6 at home in Rogers Arena, where their 40th season came to an abrupt and disappointing halt on June 15 with a 4-0 loss to the Boston Bruins in Game 7 of the Stanley Cup final. I don’t have to remind Vancouverites about the ugliness of that night.

The Canucks still don’t have a Stanley Cup despite three attempts. They do have President’s Trophy and Western Conference championship banners from 2010-2011. Nice to have, but a tough consolation prize. Canadians grow up dreaming of the Stanley Cup, not the other silverware.

Another President's Trophy banner may be the best that Canucks’ fans can hope for at the end of the 2011-2012 campaign. The team's jersey can hang beside that of the Vancouver Millionaires, but the 1915 Millionaires will remain the only Vancouver-based Stanley Cup champion for the time being.

Being the Cup loser one year and winner the next has been done before, but it is exceedingly difficult and, dare I say, won't happen for the Canucks. The Boston Bruins have a better chance of returning to the final than the Canucks do of even getting there next June.

Only seven times since 1943 has a loser climbed the mountain again the next season and claimed the Cup. Five of those involved Original Six teams.

More importantly and more relevant to the 1970-established Canucks is this: Only two of those seven teams triumphed in the post-1968 expansion era. The Canucks cannot be compared with the 1984 Edmonton Oilers, one of the greatest rosters in the sport's history. The 2009 Penguins were led by Sidney Crosby and Evgeni Malkin.

Here is a rundown of the runners-up who became winners with the Cup the next year.

The 1942 Detroit Red Wings lost to the Toronto Maple Leafs in seven games, then won 1943’s final over the Boston Bruins in a four-game sweep. The Red Wings were losers in 1949 to Toronto in four games, then winners over the New York Rangers in 1950 in seven.

The Leafs beat the Habs in six games in 1967. The Habs responded in 1968, the first year of the expansion era, by sweeping the St. Louis Blues. The Habs did the same thing in 1969. The Blues lost again in 1970 to the Bruins in, yes, another sweep.

The New York Islanders won their fourth consecutive Cup in 1983 with a sweep of the Edmonton Oilers. The Oilers got revenge in five games in 1984.

Detroit beat the Penguins for the 2008 Cup in six games. The Pens fired coach Michel Therrien during the next season and replaced him with Dan Bylsma, who propelled the team back to the Stanley Cup where it achieved revenge against the Red Wings in seven games.

The moral of the story? It's easier to win one year and return the next to win or lose the Cup you're holding than it is to transform from a loser one year to a winner the next.

Being a Cup loser means more than having no trophy to enjoy. Your calendar summer is shorter than all other teams except one. It is also the longest because of the emotional let-down of being a chump instead of champ.

Your team either undergoes too much change or too little change. If the coach is the same, other teams know what style to expect because it was on display for all to observe and analyze during the spring's playoffs. The coach simply has too little time to reinvent himself for the next season. Teams that advance to the final also tend to go without season-ending injuries to their most important stars. Those stars are one year older and the wear and tear accumulates.

Good luck, Canucks. You're going to need every molecule of good fortune to go beyond the Western Conference championship series in 2012.

(My pledge. I just know that I will be flamed by the diehards of Canuckistan, so I offer this pledge: If the Canucks prove me wrong and win the Stanley Cup next June, I will literally eat my words. That is to say, I will print this blog post, cut it up and eat it with my breakfast in public before the victory parade.)
Posted by Bob Mackin at 6:52 PM