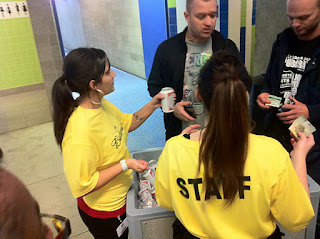 B.C. Place Stadium went a week-and-a-half without any event before the Vancouver Whitecaps hosted the Colorado Rapids in the local Major League Soccer season finale. Apparently plastic beer cups were in short supply on Oct. 22! That's why you saw fans in public seating areas and the level 2 concourse drinking straight out of cans of Budweiser.

In fact, they were being served unopened cans. A reader of this blog who was at the game reported to me that fans were also observed buying unopened bottles and departed the stadium with said containers, both opened and unopened. B.C. Place essentially became the biggest off-sales retailer of booze in B.C. on Oct. 22.

"They can't let people take beer out of the venue," said the reader. "When they sell it, they're supposed to open it."

True. It says so in the Liquor Control and Licensing Regulation.

Stadiums
49 If a liquor primary licence is issued in respect of a stadium, the following terms and conditions apply:
(a) beverages must be served in plastic, paper or other disposable containers, unless otherwise authorized by the general manager;
(b) liquor must not be sold at an activity or event without the written consent of the organizer or promoter sponsoring the activity or event;
(c) the licensee must designate areas of the stadium's tiered seating area as areas where the possession and consumption of liquor is not allowed and must, unless otherwise authorized by the general manager, ensure that those areas
(i)  consist of a reasonable choice of seats within the range of ticket prices offered at the stadium, and
(ii)  are each of a size appropriate to the level of demand for seats in those areas of the stadium.

The general manager is Karen Ayers of the LCLB. Would she have authorized the sale of unopened cans and bottles? I'll endeavour to find out and update this blog.

At Rogers Arena and Nat Bailey Stadium, staff diligently open all containers and pour them into plastic cups. I have never seen it any other way. Some sports venues in the United States will sell an aluminum can or aluminum bottle, but I have never been provided an unopened container in such a setting.

In this post-Stanley Cup riot 2.0 era, it's essential that both venues and fans be on their best behaviour.

B.C. Place officials can't forget history. On Aug. 15, 1998, the San Francisco 49ers beat the Seattle Seahawks 24-21 before 45,202 in the American Bowl. It was a muggy, Bud-sponsored and Bud-fuelled afternoon of violence in the grandstands.

Some fans were tailgating for three hours before the game. Beer sales were so brisk that purchase limits and age identification were often ignored. Two brawls broke out, including one near the secondary press box. Security guards ejected 37 fans from the stadium. One fan was arrested.

There has not been another NFL exhibition game at B.C. Place since that day.
Posted by Bob Mackin at 9:29 PM