October 14 is an ominous day for the history of the City of Vancouver.

Vancouver city council voted unanimously in a closed-door meeting on that day in 2008 for a $100 million bailout of Olympic Village developer Millennium. Financier Fortress Credit Corporation, an arm of a Wall Street hedge fund, walked away from the deal in the wake of $65 million in cost overruns and the Lehman Brothers bankruptcy. Fortress exploited a loophole in the deal in which Vancouver city hall agreed to fund the project if Millennium faltered. 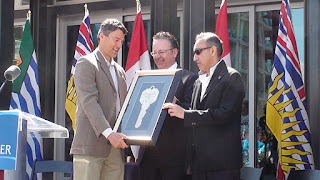 When Globe and Mail columnist Gary Mason broke the story on Nov. 6, 2008, it was the turning point in the civic election. Ex-NDP MLA Gregor Robertson and his Vision Vancouver party swept to power over Coun. Peter Ladner and the NPA. Robertson became the Olympic mayor and is seen in the photo above giving the key to the Olympic Village to Millennium owners/brothers Shahram Malekyazdi and Peter Malek at the public opening on May 15, 2010.

Not even a month after Robertson was sworn-in, he proclaimed after a Jan. 9, 2009 technical briefing that taxpayers were "on the hook" for the $1.1 billion athletes' village. Premier Gordon Campbell and his B.C. Liberals amended the Vancouver Charter to allow the city to borrow without a referendum. The village was refinanced and opened in time for the 2010 Winter Olympics. Post-Games sales were so dismal that Millennium Southeast False Creek Properties was petitioned into receivership on Nov. 17, 2010 because of a $740 million debt. Ernst and Young took over and rebranded Millennium Water as The Village on False Creek for its February 2011 relaunch. The controversy is bound to be on voters' minds as the Nov. 19 civic election approaches.

City manager Penny Ballem gleefully showed off a list of properties in an April 8, 2011 presentation that Millennium agreed to give the city. She claimed the city would recover between $56 million and $70 million but end up with a projected $48 million loss once all condos were sold in the next couple of years.

Lo and behold, filings from the Land Title Office that I obtained show that Ballem signed a form on Feb. 2, 2011 to discharge Millennium from a mortgage that was worth $1 billion on Sept. 14, 2010. See my Vancouver Courier story here.

"The Grantors (Millennium Development, Millennium Properties, et al) jointly and severally make the agreements set out in this debenture and jointly and severally acknowledge themselves liable to and promise to pay to or to the order of the city, ON DEMAND, the principal sum of one billion ($1,000,000,000) dollars at such place as the city may designate by notice in writing to the grantors and to pay interest on the principal sum outstanding from time to time… at the rate of 20% per annum both before and after demand, default and judgement."

Millennium English Bay Properties was among the seven arms of Millennium listed as a grantor on the debenture. Millennium EBP is also a partner in the Alexandra condo tower under construction at Davie and Bidwell. It is to contain 49 rental suites, as per Mayor Gregor Robertson's controversial Short Term Incentives for Rental program intended to increase rental housing in the city. Here is a critical look at STIR by the West End Neighbours, who are opposed to Alexandra.

Neither Ballem nor Millennium's Malekyazdi responded to repeated requests for an interview.

Could the City of Vancouver have negotiated for or seized more of Millennium's assets, so as to avoid leaving taxpayers with a loss on the Olympic Village?

Did Millennium's commitment to build politically motivated rental apartments in the Alexandra tower cause city hall to go soft on Millennium in the 2011 election year?

See the Land Title Office documents for yourself.

Premier Christy Clark plans to introduce an auditor general for municipalities. Here's hoping that the Olympic Village mess is the first matter examined by the watchdog.

eToro is the #1 forex broker for new and professional traders.