Case in point. Mayor Gregor Robertson on CKNW on Nov. 7, 2011 when Bill Good hosted a debate between the incumbent and his challenger, NPA Coun. Suzanne Anton. The dominant topic for the hour-long debate was the future of the Occupy Vancouver tent village protest, 21 storeys below the CKNW studios, at the Vancouver Art Gallery's north plaza. Host Good challenged Robertson on his support for the protest, which began Oct. 15, 2011. The exchange is at the 11:00 mark on the CKNW audio vault file.

Good: "Mr. Robertson, you did say the occupiers could stay indefinitely. Why did you say that?"

Robertson: "That's not correct, what I said was..."

Robertson: "No, you can check the record on that. The protest could be indefinite. People have a right to protest in Canada, that is our right. The encampment has never been acceptable. It's against city bylaws and we've been clear about that all along."

I checked the record. 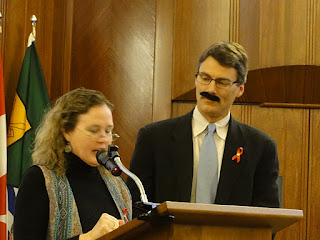 Below are your quotes from Jeff Lee's story in the Vancouver Sun on Oct. 18, 2011. The headline was "Occupy Vancouver can continue if it remains peaceful: Gregor Robertson."

The story remains online and it contains no clarification or correction.

“Obviously safety and cleanliness is crucial to the protest continuing, and violence won’t be tolerated,” Robertson said. “It is premature to say in terms of timelines [how long the protest will last] given the magnitude of this protest globally. I think we’re close to a thousand cities with these protests.”

“I believe this movement has a lot of support and kudos to the protesters and police for keeping it constructive and peaceful,” he said.

“I think everyone’s waiting to see what takes shape in terms of outcomes and agendas. There is a lot of energy around it and it has yet to be seen what results from this.”

The key word in the well-meaning Occupy Wall Street-inspired protests around the world is occupy. Occupy means "to take or hold possession or control" and "to reside in as an owner or tenant." In the context of the Occupy movement, protest and camp are one and the same. From these protest camps, the followers aim to create a movement. Mr. Mayor, you encouraged and enabled the protest camp, even when occupiers said they were gearing up for a long stay outside VAG. You accepted the camp, despite the bylaws that exist. Bylaws that could have afforded you a chance to strike a constitutional balance between public order and free speech. Don't hide from it. Now you're trying to put the toothpaste back in the tube and it's not going to be a pretty end.

Here's a suggestion. And you can thank me later for this. Charter a BC Ferry, invite all the occupiers for an all expenses-paid cruise up the coast to the campground at your Hollyhock getaway on Cortes Island and feed them as much juice and soup from your Burnaby-based Happy Planet Foods company for the rest of winter. Set-up a round-the-clock Livestream feed so that Vancouverites and others around the world can watch the general assemblies and other activities for months to come.

#OccupyHollyhock would be cheaper in the end and create the peaceful outcome you say you want.

You have more important things to do. Like clowning around with your fake Movember mustache and campaigning for re-election on Nov. 19.

I've been to occupy a few times, but maybe I wasn't really there or supporting them because I wasn't in a tent. Is that what you're suggesting?