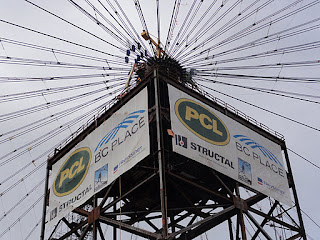 More trouble for B.C. Place Stadium, where the Sept. 30 reopening was anything but smooth.

The French headquartered cable erection company hired by a Quebec steel subcontractor is suing for almost $6.5 million. B.C. Pavilion Corporation, the taxpayer-owned stadium’s operator, is named as a defendant.

Freyssinet filed a lawsuit in British Columbia Supreme Court on Oct. 31, charging Canam with breach of contract, breach of statutory trust and equitable fraud. Problems have been festering for many months. Here's my update from Aug. 4.

Freyssinet claims Canam failed to keep work on schedule, directed labour and equipment without Freyssinet’s knowledge or consent, interfered with Freyssinet foremen and “permitted rates from Montacier International, a company related to Canam, for labour for erection of the cable which were higher than agreed upon.”

Canam announced in November 2010 that it would “follow an alternate method of erection of the cable, without consulting with Freyssinet and without Freyssinet’s consent.”

"Through 2010, payments were made by Canam on account of the invoices, but Canam then wrongfully ceased making payment to Freyssinet."

A Sept. 29, 2011 letter by Canam alleged: "Due to Freyssinet's negligence in preparation of the cost budget and the construction methodology, there was a significant cost overrun which Canam was required to bear in the fixed price contract with PCL."

"Canam intentionally and wrongfully made the demand to recover alleged damages for financial losses arising from the completed work. This was a wrongful, tortious act constituting equitable fraud."

As of Oct. 19, certificates of completion had not been issued for the head contract. The stadium reopened Sept. 30.

The Freyssinet claims have not been tested in court. I am waiting for responses from Canam and PavCo.
Posted by Bob Mackin at 12:19 PM