Occupy Vancouver notebook: He came but did not see 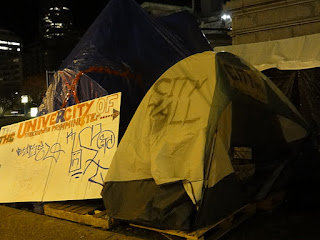 He arrived by car after 8 p.m. and walked across the bike lane he built.

He stood to the left of the soft-spoken police spokeswoman and waited for her to finish. The left is where he is most comfortable.

His back was to the Vancouver Art Gallery wall as he faced the cameras and microphones. His handlers were nearby. Deputy city manager Sadhu Johnston was in the shadows.

“A young woman has lost her life and it is a terrible tragedy, our thoughts and prayers go out to her family and her close friends,” said Mayor Gregor Robertson. “Obviously really, really tragic circumstances. This loss of life and the overdose a few days ago clearly demonstrate that the situation here at the encampment has deteriorated.

“I have directed the city manager to expedite the appropriate steps to end the encampment as safe as possible, with a safe resolution being absolutely critical.”

Will it be a court order delivered by police that ends the Occupy Vancouver protest camp which began Oct. 15? He did not say.

The Mayor was finally taking action and talking semi-tough because of 23-year-old Ashlie Gough’s death. She had been found in a tent, unresponsive, around 4:30 p.m. Police wouldn’t confirm that she died of an overdose. Gough (right) was from Victoria. (This is her Facebook page and here is her hi5 page..)

She was dead on arrival at hospital. Coincidentally, the punk band DOA played a 5 p.m. gig on the steps of the old courthouse amid a surreal scene as dusk turned to darkness on the crisp Saturday night.

An area of the plaza bordering on the Howe Street sidewalk was cordoned-off with yellow police tape. Several civic workers in fluorescent safety vests over their street clothes stood around, smoking cigarettes inside the tape, keeping guard. Some wore Occupy Vancouver buttons. Some wore Remembrance Day poppies. Some wore both. Police inside the area spoke with some of the distraught punk and hippy campers -- some call them squatters -- as they consoled each other. 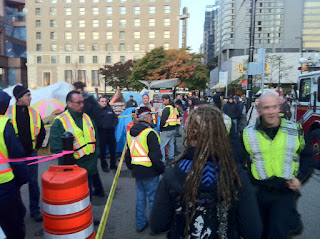 One man toting an “End Tent City Now” sign walked along the Georgia Street sidewalk, oblivious to the situation unfolding. Protesting the economy is good, but squatting is not, said Greg Burke. He was followed by a camper with a makeshift sign of his own that said “LOL” with an arrow pointing to Burke's sign. 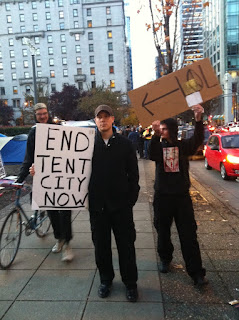 “I have no political aspirations, I don't belong to any political party,” said Greg Burke. “I’m a 23-year old disenfranchised youth who works two jobs to bust my ass to have the things I have and I don't think a bunch of people can come here and have everything handed to them."

Reporters gathered near a fire truck, waiting for someone from Occupy Vancouver or the Vancouver police or fire departments to talk about the tragedy. Suddenly a man was grabbed by police and forcibly removed from the plaza. Cameras rolled. Then the 9/11 Truthers appeared, blocked cameras and shouted “corporate media scum!”

The conspiracy theorists were blocking the media from reporting on a potential case of police brutality. Fancy that!

A group of well-dressed women in their 50s and 60s stopped by, on their way to a birthday party and posed for photographs with the police officers, who stood with their backs to the scene. One of the cops took the photo for the giddy ladies. They all smiled but the misery continued behind them. 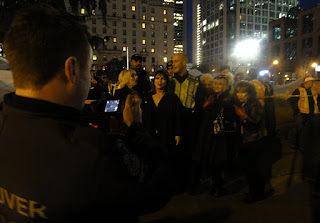 The band played on. There was slam dancing and pot-smoking and beer drinking. Did they know one of their own had died?

Occupy Vancouver member Lauren Gill, an addiction services worker, was shocked that the show went on.
“It’s a real tragedy, is it the breaking point? No,” Gill said. “I’m sure we’re going to support each other through this.”

But it may be the breaking point for the Mayor, who tried to say all the right things for a Mayor whose future will be decided by voters in just two weeks.

“We want the protest to continue, the encampment is not okay anymore,” he said to the media. “We can have a vibrant robust protest here, but having people die on this site, having ongoing issues that really undermined the bigger picture is not okay.”

The Occupiers stood on the edge of the media scrum, wondering aloud why he hasn’t solved homelessness and why other drug overdoses elsewhere in the city don’t attract similar attention.

The Mayor, who instructed top officials to take steps to end the camp, did not take steps of his own towards the camp. He did not go there to offer his condolences to the friends of the dead woman or repeat his media lines.

Safety would not have been an issue. There were enough police to guard him. The Occupiers, who declared the plaza a “self-ruling autonomous zone” insist they’re peaceful. They even cheered him at city council on Nov. 1 when he thwarted mayoral opponent Suzanne Anton’s motion to shut down the site.

That was then, this is now. A woman is dead. There is an election campaign. The Mayor has an image to protect and a job he wants to keep for another three years. Opinion polls before Nov. 5 indicated he’s in a can’t lose race for re-election. Now he’s in a can’t win situation with a tent village that he originally enabled.

So he walked south and crossed the bike lane he built and departed in a car on Hornby Street at 8:20 p.m.

During the scrum, I asked the Mayor if he would walk down the sidewalk, turn the corner to the tent village and meet the residents. I also asked him if he had been there yet.

He didn’t answer the first part of my question, but said: “I've been on this site many times over the last couple of weeks... every day over the last several weeks.”

“I have not seen him once,” said Chris Shaw, a volunteer medic and well-known anti-Olympic activist and author. “The Mayor is playing politics with a tragic incident, if it happened two blocks away he would not have cared.”

“I've never seen him down here,” said Eric Hamilton-Smith. “I'm down here a lot, most of the time I'm usually in the tent getting some work done. I can't speak to the fact that he says he's been here. I don't want to call him a liar, but I've never seen him personally.”

I’m hoping the Office of the Mayor will disclose the days and times of the Mayor’s Occupy Vancouver visits. There is no reason to keep such visits secret. If I’m forced to file a Freedom of Information, it could be a long wait.

Anton visited the camp on Oct. 31. She returned there on Nov. 6 to pay condolences to Gough.

Hamilton-Smith had an interesting take on Gough's death.

“Today's incident was a clear reflection of that, the fact there are so many marginalized people in society where they have lost hope and hate themselves so much where they can't find any fulfillment in life so they turn to drugs,” he said.

“Look at the people who become discouraged, the unemployed. that labor market transition from unemployment to exiting the labor force.”

Said Shaw: “It had nothing to do with it being on this site, if it had been somewhere else the person would have died.
“(Robertson is) playing politics with a tragic indecent and trying to use it as an excuse to shut down the camp. that is an embarrassment to his campaign.

The man who overdosed Nov. 3 on heroin at Occupy Vancouver was treated and released from St. Paul’s Hospital only three hours after he was revived from cardiac arrest, according to volunteer medic Leah Pagels.

Volunteer medic Mathew Kagis was first on-scene Nov. 3 and performed CPR to save his life.

“Going into cardiac arrest, you should be under observation for 24 hours,” Pagels said. “That to me is ridiculous that somebody overdoses and is released back into the street because they’re stable. That’s basically sending him back to die.”

He returned to Occupy Vancouver and was taken to Vancouver General Hospital on Nov. 4 after medics became concerned with his condition.

Pagels said the man is an aboriginal from Arizona who lost a leg in a freight train incident. He waited five hours for treatment at VGH and was transferred to detox for a week. She said his name is Tyler, but declined to give his last name.

“I find him very pleasant, a guy that hasn’t been given the best opportunities in life,” she said.

Shaw is one of at least three candidates for office in the Nov. 19 civic election involved with the camp. He is running for the De-Growth party for city council. Housing activist Gill is a candidate for council, under the RICH banner (Rent Is Crazy High). Darrell “Saxmaniac” Zimmerman is running for the mayoralty. He is the infamous stuffed lobster-toting, saxophone player who disrupted the Board of Trade mayoral debate on Oct. 25.

They could be doorknocking, mainstreeting, fundraising and baby-kissing. They’re at Occupy Vancouver instead, trying do do what they think is the right thing for society.

The coroner investigating the death was Kate Corcoran, a former Vancouver TV reporter who won awards for her work at CKVU and CTV 9.

"Gregor, I am not that political. I am also not supportive of violence. But honestly, Gregor, today I could have taken you down. I was that angry. And I was that ashamed of you. If only you could be as astute as Ta'kaiya...and she is only 10 Gregor. Shame. Shame on you. Shame on everyone that wishes Occupy away because of this event (this death). Find a better reason. Don't shut it down because you suddenly feel guilty about a death in your city. It's just another death, why start feeling guilty now?"