The Vancouver Whitecaps finally have their long-sought training nest. 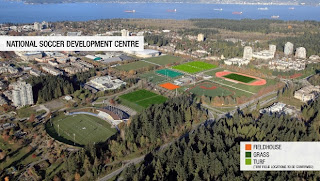 .
The provincial government kicked in $14.5 million to the $32.5 million National Soccer Development Centre at the University of B.C.'s Thunderbird Park for a trio of natural grass pitches, a pair of synthetic turf fields and a field house. Another $3 million is on the table for future replacement of the artificial turf. It's near the Doug Mitchell Thunderbird Sports Centre, the white elephant of the 2010 Winter Olympics where few spectator events happen. The B.C. government paid about $19 million of the $47.8 million bill for the Games' secondary hockey venue.

The soccer complex was originally earmarked for Delta and announced amid the last provincial election campaign on May 2, 2009 -- 10 days before the BC Liberals won another term. Premier Gordon Campbell had announced $17.5 million from the province towards a $31.5 million complex on 20-hectare John Oliver Park.

But the attempt to buy the soccer vote near tony Tsawwassen got the yellow card from voters and municipal authorities. Liberal parachute candidate Wally Oppal lost on a recount to independent Vicki Huntingdon. By February 2010, Delta municipal council grew frustrated with the Whitecaps and nixed the project.

Municipal land in Surrey and Burnaby was also eyed and the Whitecaps didn't endear themselves to those city halls. Enter UBC, which isn't a municipality (read: less bureaucracy) and happens to be in the Vancouver-Point Grey riding represented by Premier Christy Clark. Whitecaps' secretive and wealthy principal owner Greg Kerfoot is a personal friend of the premier. In seven donations since 2005, Kerfoot has given the BC Liberal party $36,790 via the Whitecaps and his company, Inspirit Group.

Tech tycoon Kerfoot, a 1983 UBC computer science graduate, could afford to pay the whole bill himself for the training centre. Through a real estate agent, he was flogging this West Vancouver waterfront mansion on Stearman Beach for almost $10 million and seeking Vancouver city hall approval to build an office tower in downtown Vancouver at the southeast corner of Cordova and Granville. Back in 2005, the Whitecaps proposed using $60 million of Kerfoot's money to build an outdoor stadium north of Gastown. He already bought the land, worth $20 million. City council sent that hot potato to Port Metro Vancouver, where talks stalled for good. The Whitecaps eventually scored a sweetheart rent deal in the renovated B.C. Place Stadium. B.C. Pavilion Corporation refuses to tell me what, if anything, the Whitecaps pay for rent.

The Sept. 6 announcement happened in Clark's riding, but the Premier was not there! Clark attended the annual Order of British Columbia awards ceremony at Government House in Victoria. Asked where she was in the afternoon, press secretary Mike Morton told me on Sept. 10 "the short answer is meetings." He suggested I make a Freedom of Information request for her agenda if I wanted to know more.

The scheduling could have been a very clever tactic, to keep Premier Photo-Op away from cameras at what was the de facto kickoff of the fall 2012 phase of her 2013 re-election campaign (however futile it may be).

Make no mistake, the joint government/Whitecaps/UBC news conference was to curry favour with a large portion of voters. Soccer is the biggest participatory team sport in B.C. The B.C. Soccer Association claims 100,000 youth players and 20,000 adult players, plus 2,000 registered referees. That's a lot families and their votes could mean a lot to the desperate-to-stay-in-power governing Liberals next May.

The Vancouver Whitecaps and the B.C. Liberals. Both mired in a slump.