Exclusive: inside the Vancouver 2010 anti-doping lab 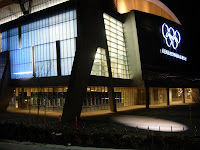 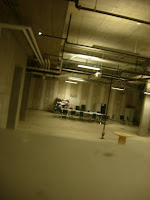 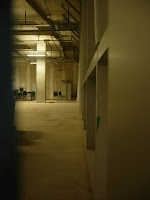 Last time I was at the Richmond Olympic Oval, for the Cold-fx sponsorship announcement on Jan. 20, I sought an update on the development of the anti-doping laboratory for the 2010 Winter Olympics and Paralympics. I was told that a peek inside was absolutely not allowed. Important work was underway and it could not be disturbed because the facility will need international standards approval and accreditation from the World Anti-Doping Agency before it can test athletes' urine and blood for banned substances. In 52 weeks, the Oval will be where Olympic medals are won and lost.
I was guided to the exterior southeast corner of the building near the southeast corner and intersection of Hollybridge Way and River Road. The windows were covered. Nothing to see... move along... as they say.
I was in the area on Sunday night and curious if anything had changed. There were lights on in that corner of the building. I was able to gaze through one knee-level window. I stood on my tippy toes and stretched my arm to snap a shot through another window. My camera captured the above shots: a room empty, save for some tables, chairs, filing cabinets and miscellaneous items. There doesn't even appear to be a pot to pee in. This hardly looks like a laboratory in development. Click on the photos to enlarge them.
By the way, maybe someone at VANOC or City of Richmond should invite Google to shoot a new aerial pic. The one that's available by searching Hollybridge Way and River Road on Google Maps gets you a photo that shows the trailer park that was displaced by the $178 million Oval.
I never visited that trailer park, but I wonder if Ricky, Julian and Bubbles had west coast cousins? Where are they now?
Posted by Bob Mackin at 8:14 AM