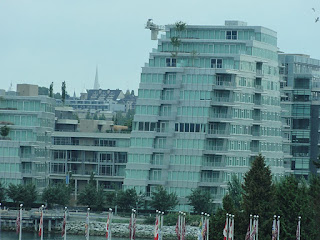 Vancouver’s Olympic Village is the multiparty monument to megalomania. The entire complex may no longer be a ghost-town, but Canada House (right), the waterfront home of Canada's 2010 Olympic team, remains an eerily empty haunted pocket on the controversial $1.1 billion site.

Whether it was the NPA, COPE or Vision Vancouver in charge at 12th and Cambie, they all share in the blame for creating this financial monster and it's the civic taxpayer that winds up with the ghastly loss.

The official version is a $48 million loss. We will never know the value of the time spent (or lost) by bureaucrats on this file since word leaked that a secret meeting took place on Oct. 14, 2008 to give developer Millennium a $100 million bailout after lender Fortress Credit Corporation walked away amid cost overruns and the global economic crisis.

The rush to slap the "sustainability" label onto this project was laughable and, frankly, deceptive.

Did you know? The original plan in the 1998 bid to the Canadian Olympic Committee was for the village to be student housing at UBC. UBC went ahead and built housing for students, but also for the market, anyway. City hall under NPA Mayor Philip Owen wanted to use the village to kickstart development in Southeast False Creek. A laudable goal, but it was a victim of scope escalation. Just like the Olympics, it had to be bigger, better, glitzier. World class!

It's also the classic case of overpromising and underdelivering in the realm of social housing. Plentiful and affordable it’s not.

NPA Coun. Suzanne Anton, who is running to be mayor, has proposed a motion to council on Oct. 18 seeking the up-to-date numbers on sales and occupancy. We haven't had an official report since May 17 when Ernst and Young made new court filings. Anton really ought to be promising a full and complete independent audit and inquiry of the entire history of the project, should she upset incumbent Mayor Gregor Robertson in the Nov. 19 civic election. Of course, Anton was wearing her pom-poms when the NPA-majority city council chose Millennium as the developer in 2006. Millennium did not have the experience and, it turns out, the financial backing to undertake the ambitious project. A report by KPMG questioned Millennium's selection.

Lo and behold, city manager Penny Ballem has become a late addition to the agenda, to provide an update on the Olympic Village. Perhaps Ballem will explain why she signed a document filed at the Land Title Office that appears to let Millennium Development off the hook for $1 billion. Read my story here and see the documents here. Millennium is also a partner in a controversial West End condo tower where 49 rental apartments are being built under the politically motivated Short Term Incentives for Rental program. Ballem did not respond to my repeated requests for an interview on the topic.

Did Ballem, either working alone or on the instruction of the Mayor or council, leave money on the table in the negotiations with Millennium over its $740 million debt?

Perhaps Ballem will untangle the web of confusion and answer questions about those Land Title Office documents. Not to mention, tell us exactly how many Olympic Village units were sold and when. The answers are so elusive.

Marketer Bob Rennie told me in an April 11 interview that as of April 5, there had been 118 unconditional sales of units worth $80 million since the February marketing relaunch as the Village on False Creek.

On Vision Vancouver Coun. Geoff Meggs blog, it says there were 164 sold as of mid-September. His blog also says that 427 of the 737 total market units are sold.

And how many of those since April 5? Forty-six?

Spokeswoman Lesli Boldt pointed out that the May 17 report from receiver Ernst and Young said there were 124 sales or unconditional offers, with a gross value of $86 million, since the relaunch.

"In other words, 40 additional condo sales occurred between mid-May and mid-September (and this is during summer, a typically slow sales season)," Boldt said.

Meanwhile, lawyer Bryan Baynham, who is acting for 70 purchasers who want refunds for alleged shoddy workmanship and deceptive marketing, tells me there are no settlements or hearing dates scheduled and the city has yet to send him a list of documents.

The civic election happens Nov. 19, two days after the first anniversary of the receivership of Millennium’s Southeast False Creek division that developed the Village.

This story is far from over.
Posted by Bob Mackin at 11:19 AM

Thanks for this post. It Very nice Blog. It was a very good Blog. I like it. Thanks for sharing knowledge. Ask you to share good Blog again.Jerusalem Short Term Rentals