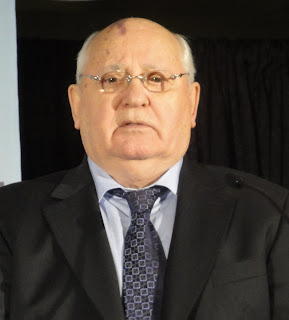 Oct. 13, 1986 was the closing day of Vancouver’s Expo 86. The world exposition on transportation and communication. I was there, all the way until the end, roaming the empty, closed site one last time. From end-to-end.

Twenty-five years later I was in two venues that didn’t exist at the time: Rogers Arena, built in 1995 near the site of Expo 86’s giant flag, hockey stick and puck and Vancouver Convention Centre West, opened in 2009 to be the international broadcast centre for the 2010 Winter Olympics. The east wing was built as the Expo 86 Canada Pavilion.

At Rogers Arena, it was Free the Children’s annual We Day. A day of inspirational speakers and hopeful messages for the leaders of tomorrow. With what passes for today’s top 40 music between the speakers.

Among the speakers was Mikhail Gorbachev, the last president of the Soviet Union from 1985 to 1991. A man who changed the world and won the Nobel Peace Prize on Oct. 14, 1990. I was among the minority of people in the arena who was alive when Gorbachev was in power. (I also remember one of his previous Vancouver visits, when Nardwuar the Human Serviette made him laugh.)

Gorbachev, who turned 80 earlier this year, told the youth audience, through his translator, that the hopes of the world after the Cold War have not been fulfilled. The world is troubled by terrorism, poverty and an environmental crisis.

“The global financial crisis that was caused by the greed of a few people is being resolved at the expense of ordinary people, ordinary people who are not to blame for that crisis,” he said.

He said we're on the cusp of a new arms race that could be more dangerous than the last one.

His most poignant message?

After his speech, he came to a news conference. Reporters were crestfallen when told by a We Day organizer that the news conference would last only 10 minutes. We got angry when the moderator cut it short. Both Gorbachev and his interpreter briefly pleaded with their hosts for more time! Imagine that, a career politician who did not want a press conference to end!

He was asked for his thoughts on the Occupy Wall Street movement. During his presidency, people in the Eastern Bloc risked their lives and took to the streets to demand better government and better jobs. It even influenced the short-lived pro-democracy movement in China that ended so violently at Tiananmen Square on June 4, 1989.

In the afternoon, I attended a news conference to announce the Grey Cup festival in Vancouver, where the star attraction was not the Grey Cup (it wasn’t there) or the Vanier Cup (which was there), but Premier Christy Clark. The B.C. Liberals “jersey girl” added a Grey Cup souvenir jersey to her collection. She even dropped a football, in a neo-Stanfieldian moment. (My camera was unfortunately not rolling.) 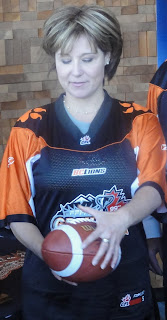 This is what she had to say about the Occupy Wall Street movement coming to Vancouver on Oct. 15:

"Canada is a profoundly different place than America. When we look south of the border and see what's going on there, we feel pretty grateful that we live here, in a country where we have a thriving middle class, where we have a large degree of equity and social justice. I think groups that want to try and start up something like Occupy Wall Street here aren't going to see the same kind of success. We are a fundamentally different country from America. We are a fair country, we're not always perfect, there's no question about that, but this is a country that is a whole lot fairer than almost any other country in the world. I think when you live in a country like this it's a lot harder to recruit people to groups like Occupy Wall Street than it is in other countries in the world where maybe they don't have the same kind of equity that we have here."

Translation: Be a good Canadian. Be deferential to the powers that be. You have it good, don't demand better. Don't complain or ask questions.

After a scrum that lasted exactly four minutes and 52 seconds, Clark turned her back and walked away. My shouted question about the upcoming first anniversary of the end of the notorious "Basi-Virk" government corruption trial didn’t prompt her to turn around. Instead it made her walk away faster, into a nearby ballroom.

Before her tenure as a CKNW talkshow host, Clark was deputy premier when BC Rail, a taxpayer-owned railway, was privatized in a fishy deal with CN Rail in 2003. A deal which sparked the famed bribery trial of ministerial aides David Basi and Bob Virk, which shockingly ended on Oct. 18, 2010 with a plea bargain and the government agreeing to pay Basi and Virk’s $6 million legal bills.

Here’s my story on the first anniversary and renewed calls for a public inquiry by the men who know the scandal the best: Bill Tieleman and Alex Tsakumis.

While the Occupy Wall Street movement encourages discourse about the role of governments and corporations, British Columbians should never forget the scandal which dominated the news for most of a decade. The BC Rail corruption scandal was the most egregious example in this province's history of government cozying up to corporate interests and losing sight of its responsibility to the people. A public asset was sold in sordid fashion and none of the politicians involved has offered a full and complete explanation about how and why the deal went down.

Premier Gordon Campbell said it was only about two men who admitted their guilt. His successor Clark has parroted the line. She has refused calls for a public inquiry.

Are they telling the truth or was this a massive cover-up? Were Basi and Virk the only perpetrators or were they patsies?

The reality is government has to buy from and sell to private companies. If a tendering process cannot be transparent when it demands transparency or be secret when it demands secrecy, why should the taxpaying public or private companies have any trust in government? Until "BC Railscam" is fully understood and government integrity rescued, citizens will remain skeptical of any case of any private-public partnership, privatization, subsidy or bailout.

Contrast Clark's behavior with that of Gorbachev, a man of courage, willing to spend more time to take more questions. During his presidency, he was a politician who wanted less power, not more, in a country with a nasty history of megalomania (read: Stalin). Gorbachev is not universally admired in Russia. Many of his compatriots wish the Soviet Union still existed. Others are thankful they could taste some freedom, but want less corruption and more democracy from today's leadership duo of Dmitry Medvedev and Vladimir Putin.

Gorbachev wanted the people to take a deep breath and shape their own future, not politicians. "Glasnost" (openness) and "Perestroika" (restructuring) were the hallmarks of Gorbachev's administration. What a concept? They mean so much more than Clark's "jobs" and "families" mantra. Without openness and restructuring, how can families enjoy prosperity?

If people don’t trust their government to listen to the people, then people take to the streets in protest. A protest like Occupy Wall Street. Or Occupy Vancouver.
Posted by Bob Mackin at 9:03 AM