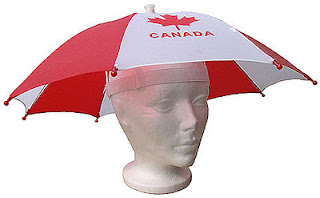 If you're going to see the Vancouver Whitecaps host D.C. United on Oct. 12, wear a rain jacket and bring an umbrella. In fact, this umbrella hat could be the most appropriate attire for any event at B.C. Place Stadium for the time being.

Oh, the new retractable roof of B.C. Place Stadium is bound to be closed for most of this fall for the obvious seasonal weather. But after several fans at the B.C. Lions' Oct. 8 win over the Calgary Stampeders got wet, B.C. Pavilion Corporation cannot guarantee a dry experience. Workers are still sealing the roof from the elements.

Should we be surprised? British Columbia has a long history of leaky buildings.

Expo 86 modular pavilions were leaky and needed patching. Same for the Expo Centre, now known as Science World, after it opened in 1985. There was a billion-dollar epidemic of leaky condominiums because of shoddy 1980s and 1990s workmanship. An estimated 65,000 dwellings had leaks that rotted walls. Former Premier Dave Barrett conducted an inquiry into the scandal.

As the 2010 Winter Olympics approached, B.C. Place Stadium’s 1982-installed, air-supported roof needed constant care from maintenance workers. Many gray garbage cans were redeployed from trash catching to drip catching. (That original roof was inflated in November 1982, more than six months before it opened, affording workers a shield from the elements while they finished the building.)

B.C. Pavilion Corporation is blaming the weather for the leaks after reopening from a $563 million renovation. But that is not the root cause.

When Podmore announced the accelerated opening, the governing B.C. Liberal Party was in the middle of a leadership campaign to replace the unpopular Premier Gordon Campbell. The successor, who turned out to be Christy Clark, was expected to call an election for October. There even is an internal government document called "Implications of a Fall Election" that contemplated a Sept. 14 election call and Oct. 12 voting day. That issue note was written Feb. 9 and dated Feb. 10. So it's not a great leap of logic for the stadium's reopening to have been a photo opportunity on the election trail.

Within a matter of weeks of Podmore's proclamation, construction was in turmoil. The installation of roof fabric was supposed to begin in February, but was delayed to April and then until June. Quebec-based steel supplier Canam Group reported to shareholders that its Structal division suffered a $25 million cost overrun and blamed it on French cable installer Freyssinet. Architects, engineers and builders had to shuffle work schedules. The B.C. Lions and Vancouver Whitecaps were chomping at the bit to return downtown. It would have been a major embarrassment for the two main tenants to have delayed their moves to B.C. Place after announcing their schedules.

Under the original schedule, crews would have enjoyed the long, mostly dry days of August to methodically put the finishing touches on B.C. Place’s roof. Instead, they had to battle the September and October rains. More than a week after the stadium's reopening, crews are still welding and sealing the fixed fabric panels.

What’s more, leaks were a problem for many months after Commerzbank Arena opened in 2005. The Frankfurt stadium’s retractable roof technology is at work in Vancouver.

After the reopening night gong show that subjected paying customers to long lineups at ticket booths and concession stands and a lack of food and beverage supplies, delaying the opening seems like one of those "hindsight is 20/20" thoughts.

As it is, Telus has delayed the announcement that it is the naming rights sponsor for seemingly pragmatic reasons. The multi-year, multimillion-dollar deal will include some cash, but it will largely be what's called "value in-kind" or goods and services in lieu of cash. Technicians are still installing telecommunications gear and teaching B.C. Place staff how to use the new equipment. Cisco is a key contractor working with Telus on the StadiumVision media management system that includes the shoebox-style, centre-hung scoreboard (what I call the Titanic Tube Under the Tarp.) Telus is using the screens at B.C. Place, both big and small, but is understandably reluctant to attach its name to the building amid what can be termed a rocky reopening. Why show off the expensive bells and whistles before you're confident they'll ding and toot properly? Why would Telus, a combatant in the telecom marketing war, want to risk embarrassment?

PavCo is hoping that all the glitches will be forgotten by Nov. 27 when the stadium hosts the 99th Grey Cup, for which the government paid $1.88 million to the Canadian Football League for hosting rights.

Expect a glitzy press conference near the end of October or start of November for the corporate renaming of B.C. Place. Will we have to dress accordingly?
Posted by Bob Mackin at 10:35 AM

BlueHost is the best hosting provider for any hosting plans you might need.