Fuel for the Flame: No foolin' 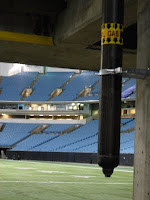 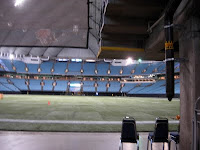 On May 15, I told you about the hole that crews dug (and covered) at the centre of B.C. Place Stadium's floor.

That's where the Olympic cauldron is going, say my sources. It's a logical spot because it's the most visible location as far away as you can get from the air-supported fabric roof while still being indoors. See the video.

Now I have more fuel for the fire. A natural gas pipe was installed in the east end zone tunnel next to section 227. I shot photos after the B.C. Lions' regular season finale on Nov. 7. The cauldron will be fed with natural gas to keep the Olympic flame burning Feb. 12 to 28.
Posted by Bob Mackin at 7:00 AM 1 comment:

Oh, to have been a fly on the wall at the Saturday morning gong show in the VANOC headquarters and at Tickets.com!

The Nov. 7 online and phone sale of 100,000 tickets for the 2010 Winter Olympics in the Canadian market could have generated, by my estimate, at least $15 million in a single-day if all sold out. That's money that cash-strapped VANOC needs so it can avoid relying on a line of credit to get by.

The first signs of trouble were apparent shortly after 10 a.m. PST when not even the virtual waiting room was open. Many prospective customers got a page that said tickets would go on sale at 10 a.m. PST on June 6! That was the start of phase 2. This was supposed to be phase 3.

Anger mounted on Twitter and after an hour some people said they would give-up. The silence from VANOC and Tickets.com was deafening. It was as if they didn't know what was wrong themselves. It is clear to see that VANOC is not equipped with crisis communications skills. This was a crisis in consumer confidence.

The website cited high demand, but that wasn't what VANOC spokesman Chris Brumwell said. A man who answered the phone and said he was assistant to Tickets.com executive Tom Benson said "They're all in meetings right now looking at it."

Finally, a news release was issued at 1:14 p.m. PST in which Tickets.com CEO Larry Witherspoon apologized. The news release explained there was a configuration difficulty "between the virtual waiting room and the ticketing transaction site."

In plain English: somebody wasn't doing their job properly. The virtual waiting room seemed to work during phase 2 in June. Most complaints had to do with the long waits to get out of the waiting room and into the ticket-ordering website. But the demand-management measure didn't work on the phase 3 launch day. It was a multimillion-dollar mistake that left egg on the face of both VANOC and Tickets.com.

I wonder how many Tickets.com techies will get virtually fired?

I wonder if VANOC will swallow its pride and offer something to recognize the time spent by prospective ticket buyers on Saturday morning? A free souvenir pin to each and every one who tried logging on would be a nice gesture. (Certainly the VANOC servers should have recorded digital footprints.)

I wonder how many unhappy customers will hold their noses and try again when the ticket window reopens Nov. 14?
Posted by Bob Mackin at 4:40 AM 1 comment: