Exclusive: Tell us, why Brown petered out of PavCo?

The mystery continues over why Peter Brown suddenly resigned from the B.C. Pavilion Corporation board of directors on Feb. 13.


All signs point to the Howe Street wheeler-dealer being frustrated over B.C. Liberal cabinet members overturning the PavCo recommendation for Telus to be the 20-year, $35 million to $40 million naming rights sponsor of B.C. Place Stadium. But the government wants to sweep it under the rug.


The Liberals promised that some of the costs of the $563 million, taxpayer-funded renovation would be  paid by sponsorship. When they went into damage control mode, Clark, Finance minister Kevin Falcon and PavCo minister Pat Bell laughably said the deal was not in the best interest of taxpayers and claimed the B.C. Place name was "iconic." Such feeble excuses.


I received, via Freedom of Information, a copy of correspondence between Brown and Falcon, including Brown's Feb. 13 letter of immediate resignation from PavCo.


A key paragraph was censored, under section 13 of the FOI act, which broadly covers "advice or recommendations" for a public body.


The missing section comes after a line that says: "In almost every case, the government dealt with us and third parties professionally, respectfully and in good faith." It appears Brown was setting up a paragraph in which he was going to give the government a piece of his mind.


Evidently, the Liberal government is embarrassed to show you and me why one of the party's biggest donors and one of the province's best-known businessmen skedaddled from the Crown corporation.


The official explanation from Brown and Podmore after the news broke in March was that Brown wanted to lessen his busy schedule and that PavCo was transitioning from a construction phase to a marketing phase. Podmore has been in no apparent rush to fill Brown's empty spot at the board table. Nor is he in any rush to tell taxpayers the final price tag for the most-expensive stadium renovation in Canadian history.

Brown's letter was an immediate notice of resignation and, based on the tone of the third paragraph, it indicates that Brown had more on his mind than a desire to lessen his schedule or assist PavCo in evolving from construction to marketing functions. Within the documents below, you might also notice how Brown mentioned he was going to visit the High Commissioner in London? That would be a certain Gordon Campbell, the former Premier of B.C. who appointed Brown to the PavCo board.


Neither Brown nor Podmore responded to my requests for comment. When will the government come clean, and just tell us the truth?


(The B.C. Lions' season opener at B.C. Place on June 29 against the Winnipeg Blue Bombers. The rematch of the 2011 Grey Cup is sponsored by Telus. Could that be the night the consolation prize, the exclusive telecommunications supply deal for Telus, is announced?)
PeterBrownFOI Mackin

Posted by Bob Mackin at 2:17 PM No comments:

Will the Gendarmes guzzle in Green Timbers? 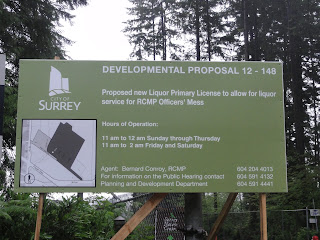 The RCMP wants a liquor licence for its new billion-dollar-plus regional headquarters at 14200 Green Timbers Way in Surrey.

That's the grand edifice being built under a private/public partnership scheme by a giant French concern. Municipalities already under pressure to sign a 20-year deal to continue RCMP service are fearing the bill for Green Timbers. Burnaby, for example, estimates it could be dinged $1.5 million-a-year for the Surrey HQ. (Read my story in The Tyee here and my story from Business in Vancouver here)

This is the same RCMP whose Sgt. Don Ray got into trouble for drinking on the job. And it's the same RCMP whose Cpl. Benjamin "Monty" Robinson got in trouble for drinking off the job. Both are still employed by the force. Robinson was convicted March 23 of obstructing justice and the RCMP's top B.C. cop, Craig Callens, says he's trying his darnedest to fire Robinson. Ray was found to have had "nooners" in the lie detector suite and enjoyed wobbly pops on the job. His discipline included transfer from Alberta to B.C. He may even get to work in Surrey at the new headquarters.

"The intent of the proposed liquor primary license is to provide liquor service only to Commissioned Officers, Non-Commissioned Officers, civilian members, public service employees (RCMP personnel), and their adult guests," the City of Surrey planning and development report says. "The proposed liquor primary license will operate like a private club for RCMP personnel. There will be approximately 2,700 employees at this location."

If the licence is granted as-is, hours would be 11 a.m. to midnight, Sundays through Thursdays, and 11 a.m. to 2 a.m. Fridays and Saturdays, and the maximum permitted capacity would be just shy of 1,200.

The report says E Division already has a liquor primary licence at its officers' mess in the existing headquarters in Vancouver. The nearest off-campus bar in Surrey is Amber Jack's Taphouse, 1.2 kilometres away at 9850 King George Blvd.

"It should be noted that the person capacity requested on the Liquor Control and Licensing Branch application is 1,198 people, and that the seating capacity proposed is 561 seats. As the building is currently under construction, the total person capacity of 1,198 people is subject to final approval of the floor plans," says the report.

An unidentified area resident called Surrey city hall to express concern "about recent media publications of allegations of officers driving drunk, causing crashes and injuring civilians. This caller was concerned about providing a liquor establishment for the specific use of officers."

The report says RCMP mess establishments are insured and those who've had one-too-many can be supplied taxi chits.

Surrey city council decided June 25 not to hold a public hearing. Mayor Dianne Watts said she is not opposed to liquor being served at special occasions, such as formal regimental dinners, but not on a daily basis. So now the matter is referred to the Liquor Control and Licensing Branch, whose general manager is Karen Ayers. Her boss is liquor minister Rich Coleman, who just so happens to be an ex-RCMP officer. He was profiled in Vancouver Magazine in 2009, which included photos of Coleman in RCMP red serge and under a stetson.

What do you think? Should the City of Surrey allow the RCMP to have what would essentially be a sanctioned beer hall? Should the long arm of the law be allowed to bend an elbow at the workplace? You can let Ayers and Coleman know your thoughts.

Ten days before he announced his resignation, British Columbia Liquor Distribution Branch general manager Jay Chambers told employees in a memo that he would guide them through the coming months of uncertainty while private companies jockey to take over the taxpayer-owned company's warehousing and distribution.

Chambers even launched an email address to which curious employees could send him questions about the privatization.

Sources have told me post-privatization retirement was on Chambers's mind. (Chambers has not responded to several of my interview requests.) Now he is instead counting the days until his July 6 departure from LDB to start a new job as president of the Motor Vehicle Sales Authority of B.C., a B.C. Liberal-friendly, industry self-regulator.

The full memo is below. (The italicized emphasis is mine.)

As you know, the Provincial Government announced in its Budget speech that it would privatize the warehousing and distribution of beverage alcohol in British Columbia.

Since this announcement, there has been extensive and ongoing media coverage about the government’s privatization plans. I appreciate that you will have many questions about how this decision may impact you and your colleagues.

We have a proud history of serving British Columbians for over 90 years and I often have opportunities to share stories about the long term dedication and commitment of LDB employees.  I am aware that uncertainty is stressful, so in the coming months, I will provide you with regular information updates about these privatization plans.

Below you will find the timeline of the Request for Proposal (RFP) process. Some of these milestones have already passed. The next significant date is June 29 which is the RFP submission deadline.

It is not known how many of these interested parties will submit a formal proposal by the deadline. Once the RFP submissions are received, they will be reviewed by the RFP team and narrowed to a list of up to three qualified proponents by late July.

I am sure you will have many questions as we move through this process. During this challenging time, I would like to invite you to send your questions to me at askjay@bcldb.com. These questions and their answers will be shared with all LDB employees on a regular basis.

March 30        RFP is issued and posted on BC Bid website (http://www.bcbid.gov.bc.ca/open.dll/showDisplayDocument?sessionID=27492391&disID=22111058&docType=Tender&dis_version_nos=3&doc_search_by=Tend&docTypeQual=TN)

March 1/13     Agreement negotiated and signed with successful Proponent by March 1, 2013.

P.S.: As usual, I remind kind and loyal readers that I gladly accept envelopes containing credible documents addressed to me at the following addresses:

Posted by Bob Mackin at 9:00 AM No comments: