When Harry Bloy resigned from cabinet on March 15, for leaking an email from a Province reporter to the company of a B.C. Liberal Party supporter, he tried his best to make it look like an honourable departure. He "felt it important" to take responsibility for his actions, according to his resignation letter.

It was either quit or be fired. He simply could not have continued as Minister of State for Multiculturalism.

I obtained, via Freedom of Information, Bloy's three-part oath of office. It includes an oath of confidentiality. The release of a reporter's email to an outsider breached his oath of office.

Interesting to note: the document signed by Bloy and Lt. Gov. Steven Point contains a key error: the first name of the lieutenant governor, the Queen's representative in B.C., is misspelled. The website for the Office of the Lieutenant Governor of B.C. indicates Mr. Point's first name is correctly spelled "Steven" -- NOT Stephen, as it appears on Bloy's oath of office.

Soccer, on the front lawn of Parliament Hill in Ottawa?

You bet. A girls youth friendly match is scheduled for 2:15 p.m. Eastern Time May 4. before Canadian Soccer Association president Dominic Maestracci and FIFA president Sepp Blatter unveil the list of cities to host matches for the 2015 FIFA Women's World Cup.

One of the cities will be Vancouver. But you'll have to wait a bit longer to find out whether it hosts a semi-final, bronze medal match and/or the championship final.

"The schedule will be released in the second half of 2012," said CSA communications manager Michele Dion.

B.C. Place Stadium's only serious competition for the final is Edmonton's Commonwealth Stadium. Olympic Stadium in Montreal is a darkhorse. Toronto will be hosting the 2015 Pan American Games, so BMO Field and Rogers Centre will be off limits. The British Columbia government committed $2 million of taxpayers funds to the CSA to bring matches to Vancouver. We do not know the full cost to taxpayers for the tournament. The federal government has promised at least $15 million.

B.C. Soccer Association executive director Bjorn Osieck will be there, as part of a delegation of seven from the west coast for the weekend's annual general meeting. Maestracci faces a leadership challenge, as Canada's four professional clubs are backing candidate Rob Newman in the May 5 election. The SBC Insurance CEO, formerly from Saskatchewan, has been a CSA vice-president since 2006 and chairs the governance committee.

The CSA will be patting itself on the back all weekend over so-called governance reforms. It's still an organization that has not met the challenge of transparency. If it really wants the public to believe in reform, the best, first step would be to release a financial report. Until then, it'll be up to us in the media to pay $5 to the government under the Access to Information Act to get a copy.

Dion said Blatter will stay for the Saturday AGM and banquet. Will it be his last visit to Canada? Blatter is serving his third and final term as FIFA president after his 2011 re-election. The world's soccer governing body is under fire for allegations of widespread corruption.
Posted by Bob Mackin at 8:34 PM 1 comment:

Face and voice of VANOC switches off Hydro

Very quietly, BC Hydro's senior vice-president of communications quit her post in mid-March.

Renee Smith-Valade went to the most-powerful (in more ways than one) Crown corporation in British Columbia after the May 2010 hiring of Dave Cobb as chief executive. Cobb was deputy CEO to John Furlong at the Vancouver Olympic organizing committee. Cobb was also vice-president Smith-Valade's boss at VANOC, where she ran the 2010 Winter Games' communications and media relations department. She brought staffers Chris Brumwell, Greg Alexis and Jennifer Young with her.

Last fall, Cobb quit his $550,000-a-year job at BC Hydro to join the Jim Pattison Group where he works as managing director of corporate development, with president and ex-Premier Glen Clark and billionaire chairman Pattison.

Brumwell, a former Canucks and VANOC communications manager, preceded Smith-Valade out the BC Hydro door to work for Vancouver yoga wear juggernaut Lululemon. 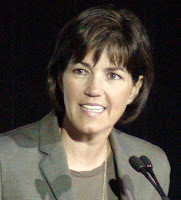 When I broke the news of Smith-Valade's departure via Twitter on May 2, Bill Tieleman was quick to re-Tweet and then add his speculation:

Scott's move out of Premier Christy Clark's office and into Government Communications and Public Engagement (read: propaganda office) became public earlier in the day. Scott's position became newsworthy in recent months because her husband is the CBC's talented Legislature reporter Stephen Smart. One of their wedding guests was Premier Christy Clark. The Smart/Scott relationship was the subject of an investigation by CBC's ombudsman Kirk LaPointe. LaPointe "found a violation of CBC Journalistic Standards and Practices."

Clark has had a revolving door of press secretaries. Chris Olsen, the consumer reporter who was "On Our Side," quit CTV to be on "her side." Now he's on the outside. In January, Clark figuratively kicked Olsen on the backside, with a $67,000 severance.

She filled the job with Sara MacIntyre, who was an effective spokesperson for the Canadian Taxpayers' Federation but went on to work in the Prime Minister's Office under Stephen Harper. MacIntyre is part of Clark's bid to be a Liberal in Conservative clothing. It hasn't worked so far and MacIntyre was notorious for the poorly handled photo and interview opportunity with Clark at the Globe 2012 trade show.

At Hydro, Smith-Valade's job included leading the marketing communications, website management, media and public affairs, community relations and customer care and conservation teams. On her LinkedIn page, Smith-Valade describes herself as a "creative consultant" with her own RSV Strategic Communications firm. Her list of qualifications ends with "government/public affairs support."

Here is the email to BC Hydro staff announcing her departure:

After a year and a half leading our Communications team and, more recently, also the Customer Care and Conservation teams, Renee Smith-Valade has resigned from her position as Senior Vice-President on the Executive Team to take some time off and then pursue other opportunities in communications.

Renee joined BC Hydro shortly after finishing up five years with VANOC and jumped in with both feet into leading the Communications team. Over the last 20 months, Renee has confidently led the Communications team through many challenges including supporting the rollout of the Safety Taskforce recommendations and the Smart Metering Program, the Fraser River Towers incident, rate increases, the communication of the Government Review and its outcomes, and the rollout of seasonal Power Smart marketing communications programs, to name just a few highlights. Through all of this, she maintained dedication and passion for her team and BC Hydro. Most recently, she relished the chance to start working with the Power Smart and Customer Care teams in August to help them to continue to deliver strong conservation programs and our highly regarded customer service.

Renee has often commented on how fortunate she is to work with such a strong team and how enjoyable it has been to work with the dedicated people at BC Hydro. I am taking some time to assess how we can best ensure the continued strong performance of the Communications, Customer Care and Conservation teams, and particularly how to maximize the strong leadership of these areas that Renee has told me she values enormously. I will let you know when those decisions are made. In the meantime, I am confident that Lisa Coltart (Power Smart and Customer Care), Steve Vanagas (Corporate Communications), Cynthia Dyson (Marketing Communications and Brand Strategy) and Thoren Hudyma (Community Engagement and Capital Projects Communications) will continue to do a great job as we meet the opportunities and challenges ahead.

On behalf of the Executive Team, I would like to thank Renee for her hard work and dedication through a very challenging year. I know all of you will join me in wishing Renee the very best as she takes some well-earned time off with family and explores other opportunities.

Will she end up in government, helping Clark rescue her political career? Will she be reunited with Cobb at the Jim Pattison Group or Furlong with the Vancouver Whitecaps? Or somewhere else? For now, she's not talking.

Asked for an interview about leaving BC Hydro, her emailed response to me was:

"I appreciate the request and your interest however I'm going to decline for now. Can we revisit this again In a few weeks time?"

I'll wait to find out what she says and does.