Did the British Columbia government botch another billion-dollar deal?

Some of the biggest companies in Canada think so. Could this ultimately be at the root of the cancellation of the Telus naming rights deal for B.C. Place Stadium?

Bell, Rogers and Shaw have accused the B.C. government of unfair tendering practices. They allege that the direct award of the government's $1 billion, 10-year long distance, voice, data and mobile phone service contract to Telus violates national and international free trade agreements and even the government's own regulations!

Taxpayers, they say, got the shaft.

While Telus is the biggest private sector employer in B.C., it just so happens to be one of the biggest corporate donors to the B.C. Liberals. Elections B.C. shows Telus gave $352,407.35 since 2005. Premier Christy Clark supporter Stockwell Day, the former senior federal Conservative cabinet minister, is on the Telus board of directors. Clark appointed Day (photographed below) to the B.C. jobs and investment board and immigration task force. 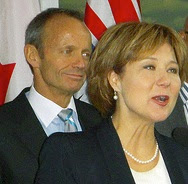 This is what happened. The government issued a Negotiated Request for Proposal for its Strategic Telecommunications Services Procurement Project on Dec. 22, 2008. Just over two-and-a-half years later, the government suddenly halted the process of tendering nine "bundles" of work, took a 180-degree turn and gave Telus the whole enchilada, as they say, on June 29, 2011. The government and Telus have spun this as an economic generator that will improve mobile phone service and Internet access in rural B.C.

"When Telus was the successful bidder on all nine individual bundles of services in the NRFP as well as on the total package of combined services, it became clear to government that, instead of awarding the bundles separately, a stronger partnership with Telus could realize a greater overall benefit to families and businesses in B.C." says the news release.

The deal includes a two-year renewal option, so Telus could make $1.2 billion by the end of the term. Unsuccessful bidders had until July 13, 2011 to file complaints and, boy, did they ever!

A political party, whose name was not disclosed, obtained the vendor complaints after filing a Freedom of Information request to the Ministry of Labour, Citizens Services and Open Government. The 189 pages of information were posted online March 9, 2012. Download them all here.

It is easy to dismiss this as sour grapes by sore losers. But it is not so simple. Read the whole file and you will quickly notice a pattern. Companies, big and small, feel they were treated unfairly by the B.C. Liberal government. Yes, that's the same party that controversially sold B.C. Rail to CN Rail and part of B.C. Hydro to Accenture. The former deal was the subject of a massive government corruption scandal that dominated the news for the better part of a decade. Clark was deputy premier at the time and has steadfastly refused to order a public inquiry.

Her leadership campaign mastermind Patrick Kinsella was involved in the B.C. Rail and B.C. Hydro deals. There is no evidence that he had a hand in the Telus matter. Yet.

So, put aside the matter of the allegedly oversized sign, the laughably "iconic" B.C. Place name or the "not the best deal for taxpayers." Those were lines peddled by the deer-in-the-headlights Premier, her Finance Minister Kevin Falcon and Jobs, Tourism and Investment Minister Pat Bell as they tried to explain away kiboshing a $40 million contract and breaking a promise to taxpayers.

Did the B.C. government cancel the Telus naming rights for B.C. Place (directly or indirectly) to distance itself from Telus, for fear of its competitors filing lawsuits and complaining to international trade tribunals?

Consider the following excerpts of complaints to government:

"Bell believes the implications of this decision reach well beyond the Ministry in charge of the NRFP. The decision has serious implications with respect to provincial, inter-provincial, national and international trade policy and existing and future trade agreements. The decision runs contrary to the Province's Agreement on Internal Trade (AIT) and Trade, Investment and Labour Mobility Agreement (TILMA) commitments. The decision is based in part on an assessment of Telus's capabilities as the only provider who could ofter the services.

"This assessment is not consistent with the regulatory framework for telecommunications in Canada, and has not been tested by a competitive bidding process. The decision runs contrary to the duty of fairness owed to all bidders participating in a competitive procurement process.

"The decision will have a material adverse effect on the availability of competitive communications services in the Province for consumers, small businesses, governments and enterprises.

"In addition to contravening international and national agreements, the Province has also breached its own Core Policy and Procedures Manual.

"The lack of an open and transparent procurement process reduces the B.C. Government's ability to ensure the best value for taxpayers. In addition, extending the scope without prior notice eliminates the opportunity of the B.C. Government to evaluate the benefits of future technological innovation, lower costs, or investment that could be provided by Shaw, or a consortium of industry bidders. This limits the B.C. Government to only the services and hardware of one vendor.

"Shaw objects to the fact that it took a two-year procurement process to arrive at NOI #4015, and then only two weeks were allowed for filing objections to this process."

"The size and scope of the contract awarded to Telus is extraordinary. As a result of this award, Telus would be the sole provider of telecommunications services to the Province of British Columbia for 10 years. The range of services and covered government entities is so broad that no other supplier, including Rogers, would be permitted to provide telecommunications services during the currency of this contract.

"At the end of this period, Telus would have such an overwhelming advantage as the incumbent supplier that it is unlikely that it could be displaced even if the province put the telecommunication requirement out to tender. Therefore, by awarding such an extensive contract to Telus, the Province effectively grants Telus the contract in perpetuity."

Any Canadians expecting the gold medal dominance of their Vancouver 2010 Winter Olympics team to translate into improvement for the London 2012 Summer Olympics team will be disappointed if predictions released March 12 come true.

Moose Jaw, Saskatchewan-native Daniel Johnson, an economics professor at Colorado College in Colorado Springs, Colo., predicts Canada will win 17 medals, including four gold, in London. That was also his prediction for Beijing 2008. The actual tally four year ago was 18 medals and three gold. Not too shabby, eh?

Well, maybe if you're the Canadian Olympic team. That would put Canada in 15th on the gold medal scale and 12th overall. On overall medals, Johnson predicts Canada will be surpassed by Netherlands and Hungary (19), Italy and Japan (31), Australia (38). On the gold medal scale, he believes India, Poland and Netherlands will win 5. Romania (6), Hungary (7) and Australia (8), he predicts, will also beat Canada.

Johnson boasts a remarkable 93 percent success rate in his Olympic predictions over six consecutive Games, and his model does not include athletics. He instead relies on a nation's per capita income, population and its proximity to the host city.

"During the last Summer Games, in Beijing in 2008, Johnson’s model forecast that the U.S. would top the medal count, and it did, winning 110 medals (seven more than predicted). He also correctly predicted that China would top the gold medal count, and it did, winning 51 gold medals (seven more than predicted). During the last Winter Games, in Vancouver in 2010, the model predicted 27 medals for Canada (they won 26 instead), but the American and German teams both vastly outperformed expectations and topped the podium more often."

What Johnson doesn't mention is that his prediction for Canada's gold medals in Vancouver 2010 was a paltry 5. Canada won a record 14.

Read more here and see the ranked prediction table below.

2012 Olympic medal predictions by Dan Johnson
Posted by Bob Mackin at 9:05 AM No comments: