There is no doubt in my mind that fact will not change in 2012. The team is 0-3 and one loss away from the golf course. Regardless, if they steal a win at Staples Center, elimination remains inevitable. Stanley Park's Lord Stanley statue will not be getting a visit from a Cup-holding Canuck in 2012.

Just as it is hard to defend a Stanley Cup championship, it is equally difficult for a runner-up to return immediately for another challenge. 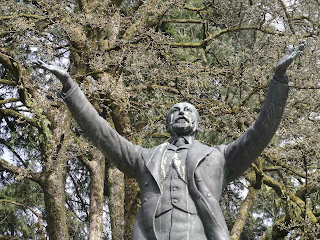 Losing in Game 7 on home ice, as the Canucks did in 2011, meant the players had the longest and shortest summers of their careers. It was a long summer of wondering why, how come and what could have been for the Canucks while members of the Boston Bruins enjoyed sharing the Cup with friends, families and communities.

Short, because (with the exception of the Bruins) the time to relax and recover before beginning the cycle anew at training camp was extremely limited. It was only 91 days since Game 7 and the players reporting for pre-training camp medical exams.

By virtue of geography and their playoff schedule, the Canucks are the most-played and most-traveled team in the NHL since September 2010. General manager Mike Gillis hired sleep consultants and other experts to mitigate the wear-and-tear, but that has only gone so far. The team exhibited weariness and unfocussed play since the so-called “Game 8” win over the Bruins in Boston. The team was 4-3 in tiebreakers before the Boston game, then went 11-6.

In March 2011, the Canucks went 13-2 (including 2 shutout wins and 1 overtime win) and outscored opponents 43-27. In March 2012, they went 9-6 (including 2-1 in overtime) and were 35-35 in the goals for/against columns. In 2011, the Canucks were hot, they were feared and they were dominant in regulation time down the stretch. In 2012, they were not. The final three regular season games in April were a preview of the 0-3 depression in the Kings’ series. The only regulation win, in which they clinched the President’s Trophy, was a game they struggled to win 3-0 over the lowly Edmonton Oilers.

Only twice since the NHL began expansion in 1968 has a runner-up rebounded. The Canucks will not be the third.

This is not a team like the 1984 Edmonton Oilers, who were led by young Wayne Gretzky, Jarri Kurri and Mark Messier. They lost in 1983 but stormed back the following year when Mike Bossy, Bryan Trottier and Clark Gillies of the New York Islanders passed the torch.

This is not a team like the 2009 Pittsburgh Penguins, who lost in 2008, had a mediocre start to the next season and fired coach Michel Therrien with a 27-25-5 record. They replaced him with Dan Bylsma, who guided the team to a hot 18-3-4 record down the stretch. Centres Evgeni Malkin (113 points) and Sidney Crosby (103) continued their dominance in the playoffs with 30-plus-points each. Goalie Marc-Andre Fleury was solid, from wire-to-wire.

To get to the Stanley Cup, a team needs to be a healthy team, working as one. It requires the right decisions by management and coaches. It also requires luck. The 2011 Canucks had all that, including the first round-winning overtime goal by Alexandre Burrows over Chicago and Kevin Bieksa’s bizarre Western conference-clinching ricochet goal against San Jose.)

In 2012, they were not dominant and decisive down the stretch. Gillis traded up-and-coming star Cody Hodgson for underperforming Zack Kassian. Daniel Sedin was injured with a concussion. Ryan Kesler and Mason Raymond are not the same players they were before 2011 playoff injuries. Gillis failed to find a grizzled vet to play a Mark Recchi-type role. Gillis couldn’t coax Mike Modano from retiring and Owen Nolan was a training camp cut.

The runner-up jinx remains. May the Canucks have better luck in 2013.
Posted by Bob Mackin at 5:54 PM No comments: