As tens of thousands of people were starting to slowly trickle into downtown Vancouver to watch Game 7 of the Stanley Cup final on big screens, Vancouver city hall key officials were instead worried about Canada Post pickets encroaching on the fan zone... which was later ruined by a riot.

The Canucks were going to celebrate Vancouver's first Stanley Cup since 1915 with a parade on land in downtown Vancouver and through the waters of False Creek.

But, alas, plans went awry. The team lost three of the last four games, including Game 7 at home, and locals rioted.

Meanwhile, at the Olympic Village...

What's the silver lining, if you can call it that, for Vancouver city hall after the Stanley Cup riot?

Well, none other than the Olympic Village! The billion dollar, in-receivership brat on Southeast False Creek has gone under the radar this summer.

Ernst and Young won't release the latest sales figures. At least not this week. But how good could they actually be? (Or, how bad?) I only ask that after the full-page advertisement I saw in the Sept. 3 edition of the Vancouver Sun.

The rebranded Village on False Creek is offering new buyers an offer they can't refuse: a free kayak, bicycle, barbecue, pots and pans, running shoes, one-zone transit pass for a year, coffee for a year, groceries for a year…

Or, instead of the lifestyle package, new buyers can take $5,000. 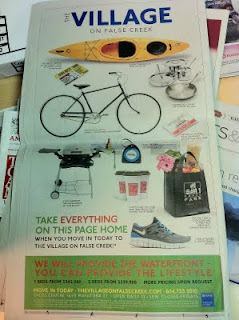 Ask yourself this: If the world-famous, world-class home of Olympic athletes in 2010 on the southeast corner of False Creek was a product that could stand on its own merits and people were beating a path to the sales centre door with cash-in-hand to get a suite while they last, would such a package be offered?

Have sales stalled, yet again?

What happened to the Salt Building? It was supposed to be the site of Mark James's next brewpub.

James has been so successful in Yaletown, Whistler and Surrey, but walked away from the Olympic Village (which does have the top-notch Legacy Liquor Store, by the way).

A Sept. 7 listing on City of Vancouver's real estate website seeks a tenant for the Salt Building. Read it here.

Can't understand why the city hasn't been peppered with offers.
Posted by Bob Mackin at 7:27 PM 1 comment: