How's this for irony?


Coca Cola Hellenic Bottling Company -- recession-battered Greece's biggest company -- is moving its headquarters to Switzerland, according to an Oct. 11 announcement.

The move was eerily foreshadowed during the London Olympics. Inside the Games broke an Aug. 17 story about how Greece wasn't even on the map displayed at the Coca-Cola-sponsored pin-trading centres at Olympic Park and Hyde Park.

There were no Coke logos at Ancient Olympia on Oct. 21, 2009 when I attended the dress rehearsal for the next day's launch of the Vancouver 2010 torch relay.

Pep vs. Pops: Will Cummins be goins?

High noon came and went on Oct. 10. John “My Way Or the Highway” Cummins is still the leader of the B.C. Conservative Party and he says he’s not going anywhere.

Fourteen people resigned by the deadline and, he claimed, 381 had signed up since Sept. 3. But a posse of four, three from the Lower Mainland and one from Vancouver Island, want a new sheriff in town. Ooh-hah. Wah-wah-wah.


The PEPPy 4’Oclock Four -- Ian Pyper, Ariane Eckardt, Dr. Allison Patton and Rick Peterson -- held court with the media at the Pan Pacific Vancouver at 4 p.m., to publicly tell Cummins they are staying put, but he should refrain from buying green bananas. The party’s going nowhere with him at the helm, they say, and it’s time for the former fisherman to cut bait and sail away while there is time. Only 30 weeks remain until the May 14, 2013 provincial election and they want him to quit as the $4,000-a-month leader by Friday, almost three weeks after the party's lone, underappreciated MLA, John van Dongen, quit.

Who are the four?

Pyper is the Oak Bay-Gordon Head constituency president. Eckardt is president in Burnaby North. Patton, the Surrey White Rock president, is a naturopathic physician with biochemistry and psychology degrees from the University of Victoria. Peterson is an investment banker and investor relations specialist, an ex-Liberal who had his eyes on the Vancouver-Quilchena riding held by retiring Liberal Colin “Co-Father of the HST” Hansen. He is, most importantly, deputy chair of the Conservative finance committee.

Together, they're officially dissenting non-dissenters, who claim they aren’t out to depose Cummins. No, they're not challenging the results of the 71% vote against a leadership review, but won't hesitate to remind one and all that only a paltry third of the party's membership voted. Peterson is a leadership wannabe, but he claims he’s not. And the sky above isn’t coloured blue at noon on a cloudless day.

The Globe and Mail’s Sunny Dhillon asked Peterson about his obvious aspirations, after witnessing the passionate speech in which Peterson made sure he looked squarely into the lenses on the TV cameras, with immediate 6'oclock news ambitions.

“That question is not relevant,” Peterson protested. He said he wouldn’t answer the question, then claimed he hadn’t even thought of the concept of leadership.

Peterson’s time at the podium included a passionate warning of the oncoming “orange wave” represented by Adrian Dix and the NDP, “a tax and spend wolf in sheep’s clothing” who is “from the left-wing of a left-wing party.”

Despite seven months remaining until election day, Peterson claimed there is plenty of time for 70-year-old leader Cummins to get out of the way so someone else could be followed. 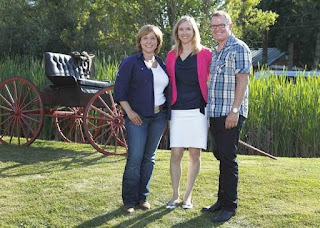 “You're all here looking for blood on the floor. Really what is going to happen is we’re all going to come out of this stronger.”

Patton is a naturopath, but, for a moment, she was a telepath.

Before I could finish asking about a photograph from the B.C. Blue blog of her standing between ex-finance minister Kevin Falcon and Premier Christy Clark at a barbecue last summer, Patton flashed an 8x10 glossy of the photo.

She explained she was invited to the event at Conservative Sen. Gerry St. Germain’s ranch. She was representing the B.C. Naturopathic Association, which had come to know Falcon while he was health minister.

“In terms of the photo itself, I thought it was kind of funny two top Liberals were endorsing a B.C. Conservative such as myself, and that's why I'm standing in the centre," Patton said.

Patton and Peterson could be the future of the Conservative party. That is, if Cummins will get out of the way.

UPDATE Oct. 11: The latest press release (below) from half of the Four O'Clock Four, explains the timing of the Oct. 10 news conference and some of the day's backroom intrigue -- including the bombshell that Cummins was offered $4,000-a-month for six months to step aside so that Rick Peterson could be installed as the leader!

Our original press conference Oct 10th was scheduled for noon. Unbeknownst to us, David Wilder (80 year old retired lawyer, the CA Vice-President, Vancouver-Quilchena), had initiated negotiations with John Cummins’ group. He became aware of our press conference and contacted us and indicated that an agreement had been made with John Cummins; he was ready to resign and that the details of his resignation were being worked out. We found out that Mr. Wilder had met with Will McMartin, Al Siebring, John Cummins via two phone calls during the meeting and another unknown individual. Apparently someone else also accompanied Mr. Wilder. Mr. Wilder also informed us that he found Mr. McMartin to be one of the most unpleasant men he had ever met.

Mr. Cummins arranged for a statement with CKNW at noon and this was delayed twice to 1:00 and then 1:30 and so our understanding was that the delay was because he was going to resign. We were made aware that the terms negotiated with Mr Cummins were that he resigns by Friday with $4,000 per month for six months and that Mr Rick Peterson would become interim leader. According to further reports from Mr. Wilder, we discovered Mr. Cummins did not want Mr. Peterson to assume the position but that he wanted one of the women as Deputy Leader until he resigned by Friday. We accepted the terms of his resignation via Mr. Wilder. To our surprise by 4pm when our press conferences took place, Mr Cummins had made no indication of this arrangement.