Fresh from two by-election losses on April 19 amid the continuing unpopularity of Premier Christy Clark, the B.C. Liberal Party is desperately searching for a way to prolong its grasp on power in British Columbia.

Meanwhile NDP leader Adrian Dix positions himself as Premier-in-waiting and Conservative leader John Cummins could become leader of the opposition.

Some Liberal strategists are trying to convince themselves that the problem is not their leader, but on their label. They're pondering a name change, which can be a risky proposition. There have been many failures in the high-stakes world of rebranding.

Should they co-opt the old Social Credit name to rejuvenate the free enterprise coalition? Should they call it the Pacific Dogwood Party, after the provincial flower? Or just simply call the whole thing "Gordon," for the first names of ex-leaders Gordon Gibson, Gordon Wilson and Gordon Campbell? (Maybe they could adopt the red, white and blue ball icon from the Barenaked Ladies' "Gordon" album as a symbol of the liberal/conservative coalition?) 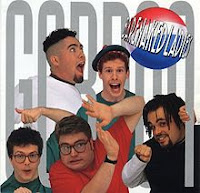 What do you think? What should be the new name for the B.C. Liberal Party?

The best, most creative suggestion for a monicker makeover wins a personalized copy of my new e-book, Red Mittens & Red Ink: The Vancouver Olympics. Deadline is noon PDT on May 12.

The winner will be announced May 14, which is, coincidentally, the one-year countdown to the next scheduled provincial election.

Vote early, vote often. Comments accepted below or via email to 2010goldrush (at) gmail.com. Be tasteful and stay classy, please.

Remember the story about the Ghuman and the gunman?

The Ghuman was Tariq Ghuman, a B.C. Liberal Party director. The gunman was Jaspal Singh Atwal, the buddy Ghuman brought to the 2012 B.C. Budget speech on Feb. 21 in the Legislature.

Atwal, a Liberal supporter, was convicted in 1987 for his attempt to murder Indian cabinet minister Malkiat Singh Sidhu, who was visiting British Columbia in May 1986.

On Feb. 27, Kim Bolan of the Vancouver Sun reported the following:

Shane Mills, Premier Christy Clark's director of communications, said Monday that Atwal only made his way onto the guest list when another person invited by the premier's office asked for an extra ticket to attend.

"His name was on a list. It was put on the list at the request of an invited guest," Mills said. "If we had known his background, he would not have been invited."

Mills said Atwal's name was just given to government the day before the budget speech.

"And we don't normally vet those kind of things. So we were unaware of the person's background and we will be working to improve the vetting and working with the Speaker's office on that," he said.

Ghuman resigned, but popped up at party events shortly after.

The Jaspal Atwal controversy garnered Clark the revulsion of commentators on opposite sides of the political spectrum, from Bill Tieleman (who found Atwal's buddy Ghuman literally rubbing shoulders with Port Moody-Coquitlam by-election candidate Dennis Marsden and former Tory MP Stockwell Day) to Alex Tsakumis (who claims a source told him Clark unsuccessfully lobbied an Indian diplomat to grant Atwal a visa so he could travel with her on last fall's trade mission to India). When I asked Mills about this, he denied the Premier did so.

So I filed a Freedom of Information request. Lo and behold, the Office of the Premier claimed it had no records. My laughter ensued.

See the two denial letters below. Then compare them with the records received when I asked for the guest list and invitation for the Clark-and-cabinet swearing-in ceremony of March 14, 2011. Remember how Clark claimed she was a champion of openness and transparency? Apparently not anymore.

Message to the Office of the Premier: I was born at night, but not last night. Kindly cough up the guest list for the B.C. Budget speech, show me the Atwal correspondence. I just hope the documents, didn't grow legs and jump into your paper shredder on their own.

UPDATE (April 24, 2012): I have formally asked for the Information and Privacy Commissioner to intervene.