Man of the people will be missed 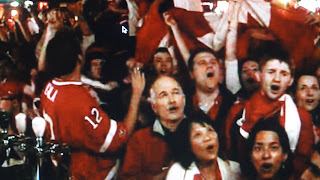 That's a screen grab from the most-watched TV program in Canadian history, the Feb. 28, 2010 gold medal hockey game between the United States and Canada at the Vancouver 2010 Winter Olympics. (If you didn't save it, you can get your own DVD copy of CTV Olympics' Hockey Gold 2010).

When you watch the DVD of the historic hockey game, you'll see Sid the Kid's great goal and you'll see Layton and Chow singing the national anthem.

On Aug. 22, 2011 it is the people of all political stripes and ways of life across Canada that are mourning the cancer death of Layton. The 61-year-old New Democratic Party leader guided his party to Official Opposition status in the 2011 federal election. Quite a feat for a party that the pundits thought was destined for third place. Quite a feat for a man who had already suffered cancer once.

Why was Layton so popular? Easy. He seemed like a trustworthy uncle to a nation. He's been called the best Prime Minister Canada never had.

On February 28, 2010, Canadians, including Layton, put aside their differences and wore red and white.

Today, think of wearing some orange, to remember Jack.